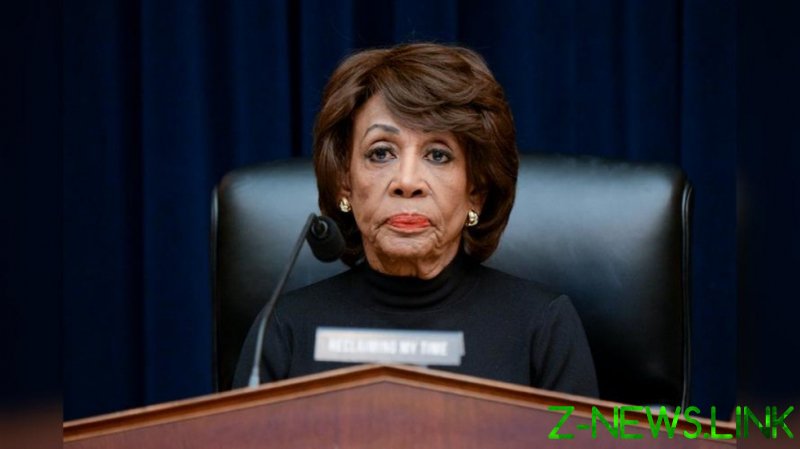 Likewise, the Democrat “leaders” and media propagandists who will, as usual, ignore or excuse Waters’ incitement to violence are reminding us that they shouldn’t be taken seriously. All of their talk about racism, criminal justice, policing, white supremacy and the like is just blather. It’s disingenuous, manipulative and dishonest. America’s dividers-for-gain are a cancerous rot on society – not people with anything genuine to say.

Waters was in classic “Mad Maxine” form when she made an appearance Saturday night at the country’s latest flashpoint for racial tension, Brooklyn Center, Minnesota, where 20-year-old Daunte Wright was shot and killed by police last Sunday. The supposed gentlelady from California traveled to Minnesota to throw kerosene on the fire, which was already hot enough with the trial of Derek Chauvin, the former police officer accused of killing George Floyd last May in nearby Minneapolis.

As if last year’s Black Lives Matters riots across the US, in response to Floyd’s death, weren’t destructive enough, Waters is calling for more mayhem if Chauvin isn’t convicted of murder. “We’ve got to stay on the streets,” Waters told reporters. “And we’ve got to get more active. We’ve got to get more confrontational. We’ve got to make sure that they know that we mean business.”

That’s right. The jury, which – unlike Waters and the other skin-color hustlers – is hearing all the evidence in the Chauvin case and being instructed on how to weigh the testimony according to Minnesota law, must give the mob the “right” verdict. It must be murder – not manslaughter, and certainly not acquittal.

“We’re looking for a guilty verdict, and we’re looking to see if all of the talk that took place and has been taking place after they saw what happened to George Floyd – if nothing does not happen then we know that we’ve got to not only stay in the streets, but we’ve got to fight for justice,” Waters said.

This is the same congresswoman who accused former President Donald Trump of “radicalizing his supporters against democracy.” She and other Democrats impeached Trump in January, accusing him of inciting his supporters in a racist “insurrection” at the Capitol after he failed to accept the will of voters and the rulings of the nation’s courts against his election-fraud claims. Dems also blasted the Republicans who refused to turn against Trump and condemn the president, even though he told his supporters to “peacefully and patriotically” protest Joe Biden’s allegedly fraudulent election victory.

Waters has been getting away with more direct calls to violence and harassment for a long time. For instance, in 2018, she praised activists who had been harassing Trump administration officials for supporting policies that aimed to curb illegal immigration.

“If you see anybody from that Cabinet in a restaurant, in a department store, at a gasoline station, you get out and you create a crowd, and you push back on them, and you tell them they’re not welcome anymore, anywhere,” Waters told supporters at a rally in Los Angeles.

Waters, 82, has built a lucrative 44-year political career largely on her ability to exploit race and division. And the ruinous riot that she praised in her home city of Los Angeles in 1992 bears an eerie resemblance to what appears to be brewing now in Minnesota.

The riot began after the acquittals of four Los Angeles police officers who had been caught on video beating an unarmed black man, Rodney King, at the end of a high-speed car chase. Violence erupted at an intersection in south-central Los Angeles, where rioters beat dozens of motorists.

One of the most horrific scenes was when Reginald Denny, a white truck driver, was dragged from his truck and beaten nearly to death by four black men. One of the attackers, Damian Williams, hurled a cinder block at Denny’s head. Scores of businesses, especially Korean-owned stores, were looted and torched.

After three days, more than 60 people were killed, about 2,000 were injured and $1 billion in property damage was done, making the Los Angeles riot the most destructive US civil unrest of the 20th century. It wasn’t spontaneous, either. I lived in Los Angeles at the time, and my relative who worked on the city’s police force told me days before the King trial ended that officers had been warned by people in the community that “not guilty” verdicts would set off a firestorm.

Waters fondly referred to the riot as an “insurrection,” meaning it in a praiseworthy way. She called it a “defining moment” in the way black people have resisted mistreatment, and she made excuses for those who looted, maimed and burned, falsely calling the event a “spontaneous reaction to a lot of injustice and a lot of alienation and frustration.” She embraced the men who beat Denny, congratulating the so-called “LA 4” after Williams and another attacker were acquitted of most of the charges that prosecutors filed against them.

Perhaps Waters’ latest appeal for violence was a fitting end for a remarkable week in exposing US race hucksters. For starters, Project Veritas put out a series of undercover videos exposing the intentional lying by CNN, including the network’s efforts to help BLM even as the group undermines its reputation with indefensible actions.

Then we saw the story of the BLM co-founder and avowed Marxist who bought $3.2 million in homes and explained that she was investing in the black community by buying houses in rich, predominantly white neighborhoods. And finally, the mother of Breonna Taylor, a Kentucky woman who became a key martyr for the BLM movement after she was killed by police last year, said the Louisville BLM chapter and other fake supporters are a “fraud,” raising money in her family’s name while having nothing to do with them.

Cultural Marxism has been used to divide Americans, largely by making everything about racism. The perpetrators, such as Waters, gain more power and money, but the outcome is a broken nation that’s teetering on the edge of disaster. Without addressing issues honestly and in good faith, nothing will be resolved.

Democrats and the legacy media are free to keep saying whatever they want, but listening and taking their allegations and propaganda campaigns at face value gives them power that they don’t deserve. The scary R-word can only be wielded as a weapon against Americans and continue to tear the nation apart if we keep pretending that powermongers like Waters are sincere advocates for the oppressed.