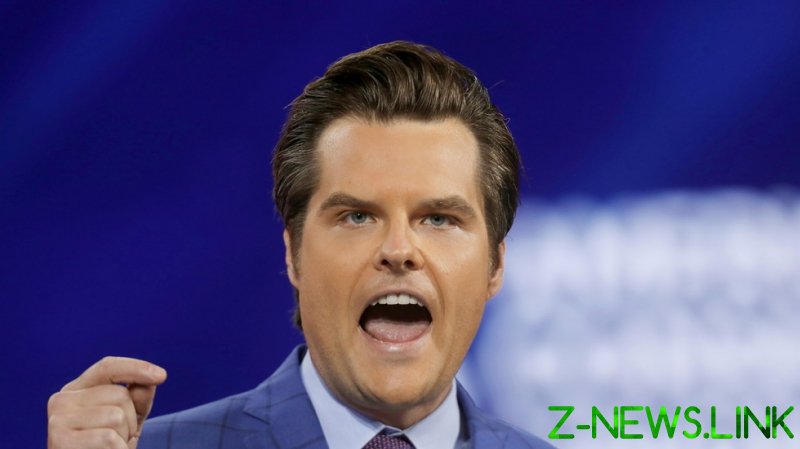 “I may be a canceled man in some corners. I may even be a wanted man by the Deep State. But I hear the millions of Americans who feel forgotten, canceled, ignored, marginalized and targeted,” Gaetz tweeted on Saturday, adding that he is still supported by “the silent majority.”

Gaetz, who has been adamant about not willing to step down, cited a poll by Victory Insights that over 70 percent of his constituents believe he should stay in office, while about 63 percent think he is not guilty of what he is being accused of – namely that he has had sexual encounters with a teenage girl, paid multiple adult women for sex via an accused sex trafficker, and used campaign funds to finance these activities.

Gaetz invoking ‘deep state’ – a sprawling conspiracy that a network of predominantly non-elected officials makes up a “hidden state” which is really in charge of the government – has sparked a torrent of outraged comments from the liberals. Actress and activist Rosanna Arquette accused Gaetz of being a “pedophile” and “a sex trafficker” – all without evidence.

Former President Donald Trump habitually referred to the term ‘deep state’ during his speeches, vowing to disrupt it as well as “drain the swamp” or rein in the bureaucracy.

On Friday, the Democrat-controlled House Ethics Committee launched a probe into Gaetz, citing a litany of misconduct allegations, including that Gaetz “shared inappropriate images or videos on the House on House floor” which were reportedly naked images of women he’d slept and that he “may have engaged in sexual misconduct and/or illicit drug use.”

Gaetz, who reportedly mulled running for the Senate in Alabama before the scandal broke, has been on the ropes, vehemently denying all allegations against him. “I’m built for the battle, and I’m not going anywhere,” he said at a ‘Save America Summit’ event at Trump National Doral in Miami on Friday.

Apart from the congressional probe, Gaetz has been investigated by the Justice Department, with its probe reportedly specifically focusing on the allegation that the Florida Republican paid a 17yo woman for acompanying him on his trips and had sex with her. Gaetz, however, argued that a sexual misconduct probe might be a ploy to distract from an ongoing FBI investigation into the alleged attempt to exort his family out of $25 million. Gaetz accused former DOJ prosecutor David McGee of being behind the scheme. McGee has denied the accusations.