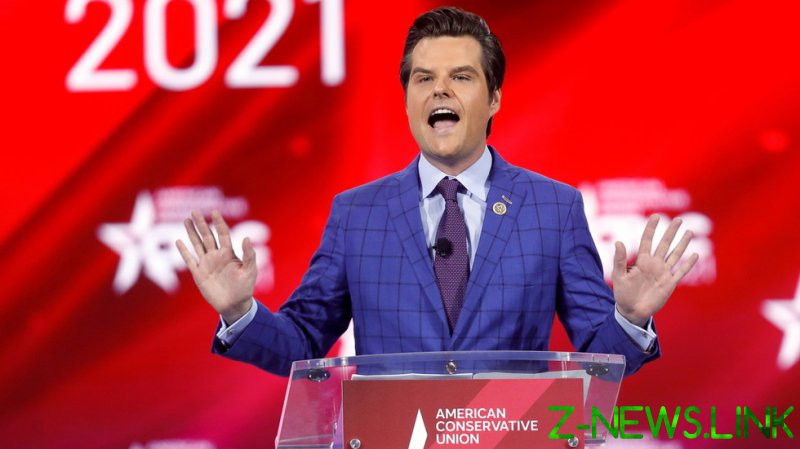 Citing “three people briefed on the matter” but not a single official on the record, the Times said Gaetz was being investigated by the Justice Department “over whether he had a sexual relationship with a 17-year-old and paid for her to travel with him.”

Congressman Ted Lieu (D-California) has already called for suspending Gaetz from the House Judiciary Committee, saying he “should not be sitting on a Congressional Committee with oversight over the DOJ while the Department is investigating him.”

Deep inside the Times story – which goes on and on about people in Florida somehow associated with someone who was once seen with someone who once appeared in a photo with Gaetz – is the admission that “No charges have been brought against Mr. Gaetz, and the extent of his criminal exposure is unclear.”

The Times also quotes “an interview” with Gaetz in which the Florida congressman said the investigation is part of a scheme to extort his family for $25 million through “false sex allegations” and that he was told he was a subject, not the target, of the investigation.

“I have a suspicion that someone is trying to recategorize my generosity to ex-girlfriends as something more untoward,” Gaetz is quoted as saying.

He said much the same thing in a series of tweets on Tuesday evening, saying “a former DOJ official seeking $25 million while threatening to smear my name” targeted his family for extortion, and that his father wore a wire at the FBI’s direction to help them capture the culprit.

“No part of the allegations against me are true, and the people pushing these lies are targets of the ongoing extortion investigation,” Gaetz tweeted, adding that the leak was “intended to thwart that investigation.”

“I demand the DOJ immediately release the tapes, made at their direction, which implicate their former colleague in crimes against me based on false allegations,” the congressman added.

The story about Gaetz was “widely shopped around,” tweeted conservative commentator Mike Cernovich, adding that this is “a case where SOURCING is as interesting as the story.”

Reached by Axios before he tweeted about the Times story, Gaetz reportedly sent the publication “screenshots of text messages, emails and documents outlining the alleged extortion scheme, which he claimed was being run by a former DOJ employee.”

He also said that he had “definitely, in my single days, provided for women I’ve dated,” such as flights and hotel rooms. “I think someone is trying to make that look criminal when it is not.” The 38-year-old congressman said he was “absolutely” confident none of the women involved were underage.

Appearing on the Fox News show Tucker Carlson Tonight on Tuesday evening, Gaetz called claims that he had sexual relations with a 17-year-old “verifiably false” and something that “did not happen.”

Gaetz also named the former DOJ official attempting to extort his family as David McGee, who left federal service in 2005 to join the Pensacola law firm Beggs and Lane. Whoever leaked the story to the Times, Gaetz said, did so in order to derail the investigation into McGee, who was supposed to be recorded on Wednesday accepting a $4.5 million extortion payment.

Earlier in the day, Axios claimed Gaetz was contemplating leaving Congress and taking a job at the conservative-leaning TV channel Newsmax. Responding to that rumor, Gaetz chose to slam Politico – a rival publication – for “verifiably false reporting” that he was a “South Florida” congressman (he represents Pensacola, in the north), but did not deny it directly.

Gaetz was first elected to Congress in 2016 and has been widely considered an ally of former President Donald Trump. Though he has disagreed with him in the past on matters of war, for example, he has gone to Wyoming to campaign against fellow Republican Liz Cheney after she voted to join Democrats in impeaching Trump over the January 6 riot at the US Capitol.