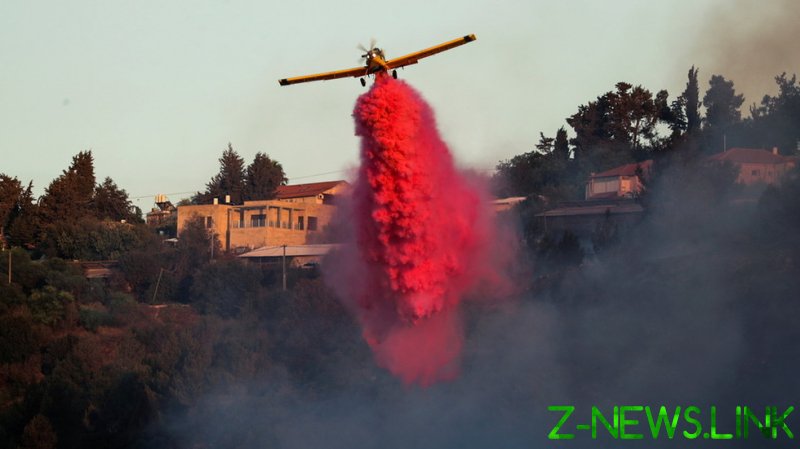 Some 75 firefighting crews and 10 planes were battling the blaze near Jerusalem on Monday, according to Israel’s Fire and Rescue Authority. The fire broke out a day earlier and has still not been brought under control, burning at least 4,200 acres (17,000 hectares) of land.

Footage from the scene shows intense flames raging alongside roads, with motorists having to drive through infernos.

Small cropduster-style aircraft were seen dumping bright purple fire retardant compounds on the hills around Jerusalem in a bid to stop the fires.

Several communities in the area have been evacuated, including homes in Givat Yearim village, located west of Jerusalem. Imagery from the scene shows that some buildings inside the settlement have already been affected by the blaze. 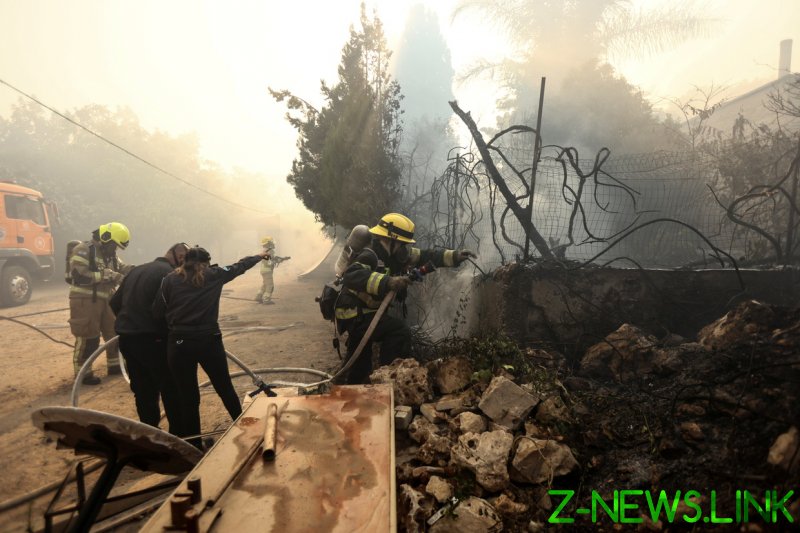 Firefighters work inside the Israeli village of Givat Yearim during wildfire in the area, outskirts of Jerusalem, August 16, 2021. © Reuters / Ronen Zvulun

The fire also threatens the largest hospital in the country, Hadassah Medical Center, which lies in the path of the blaze. Jerusalem police told Israeli media they have been working with the hospital to help staff prepare for a possible evacuation. As of Monday evening, police instructed the facility to begin clearing its parking lot to facilitate an evacuation, though none has been announced yet.

Israel’s foreign ministry said it reached out to several other nations for help, seeking immediate air support to battle the blaze. Greek Foreign Minister Nikos Dendias told his Israeli counterpart Yair Lapid the country “would help as much as it could,” according to the ministry. Greece has itself been heavily battered by still-raging wildfires, with its government repeatedly facing criticism over the state’s response to the disaster.

Multiple Mediterranean nations have been plagued by large wildfires in recent weeks. The flames, fanned by hot weather and strong winds, have devastated large swaths of forest, inflicting both human casualties and heavy property damage.