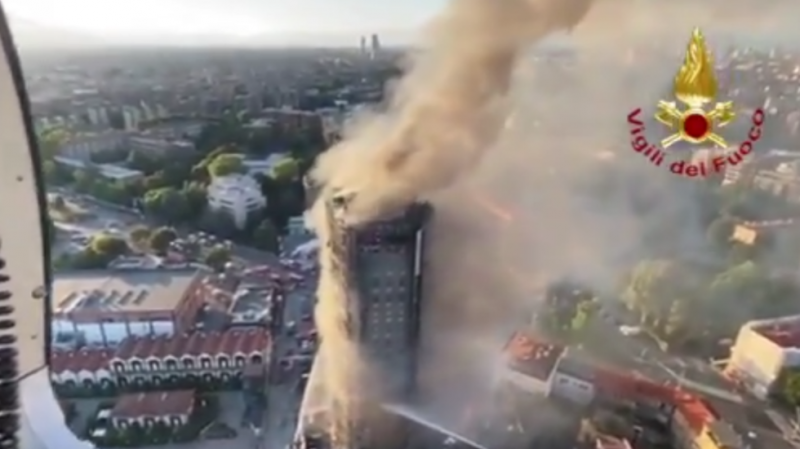 The blaze broke out at the 20-story Torre dei Moro high-rise located in the south of the city on Sunday. The fire started on the top floors of the building, which has 16 stories of furnished apartments with lower floors reserved for business. It’s unclear what caused the fire.

The fire quickly spread across the building’s facade, covered with supposedly fireproof panels. The inferno sent burning pieces of the facade raining into the street and onto adjacent buildings. The blaze, however, has seemingly not spread into the building’s internals, so far affecting it only superficially.

While the now-destroyed panels have been touted as fireproof by the building’s operator, the blaze showed it certainly was not the case.

“We have been told that the panels that covered the building were fireproof, instead they burned as quickly as if they were butter,” a local resident told Ansa news agency.

The blaze triggered a massive emergency services response, with multiple fire engines and crews rushing to the scene.

The fire has been brought “under control,” Italy’s Fire Rescue said, adding that firefighting crews are advancing toward the top floors of the building. Helicopter footage of the blaze shows multiple fire engines dousing the smoking building, while open flames are seen at two uppermost floors.

Falling debris caused widespread destruction in the building’s parking lot. About 20 cars were torched by the burning panels, leaving some as burnt-out husks.

Several people have been affected by the smoke, yet no fatalities have been reported. Later, the fire rescue service said that all the residents of the building had been reached by phone, with no missing persons reported.

The high-rise itself, however, continued to burn with open flames visible on multiple stories of the building, drone footage of the blaze shows.