Home / WORLD / Mass vaccination delayed in US and UK, as drug firms struggle to meet demand

Mass vaccination delayed in US and UK, as drug firms struggle to meet demand 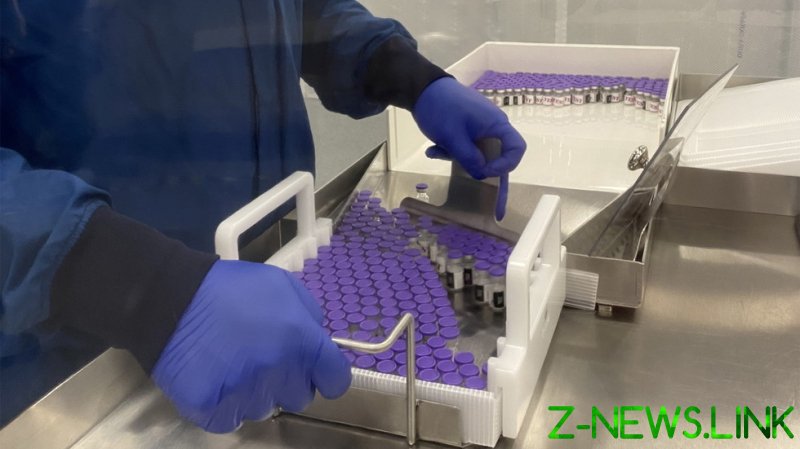 A 90-year-old grandmother was given a Covid-19 vaccine early on Tuesday morning, becoming the first Briton to receive a jab against the deadly coronavirus. Some 800,000 doses are expected to be delivered by the end of the week, and the first shot was celebrated by the government, with Health Secretary Matt Hancock declaring. “We will look back on today, V-day, as a key moment in our fightback against this terrible disease.”

The vaccine, manufactured by US drugmaker Pfizer, is just one shot the British government is banking on. In its push to vaccinate the population, it has ordered 100 million doses of another – still to be approved – vaccine made by UK pharma firm AstraZeneca.

However, its coronavirus task force stated on Monday that just four million doses of the AstraZeneca vaccine would be delivered by the end of December – a far cry from the 30 million promised earlier this year. Furthermore, these vaccines will not be manufactured in the UK, as promised, but will be imported from the Netherlands and Germany.

“There have been some challenges,” Ian McCubbin, the task force’s manufacturing lead, told reporters on Monday. “That’s why there is a little delay in the delivery of the doses.”

McCubbin promised that the delay would be ironed out and all further doses manufactured in the UK. However, the setback makes the British government’s initial plan of vaccinating every willing adult by April unlikely. As of Monday, a Downing Street spokesman said the “majority” of vulnerable people would be vaccinated in January and February, but did not provide precise numbers.

In the US, the Food and Drug Administration meets on Thursday, and will likely grant emergency authorization to Pfizer’s vaccine. However, the Trump administration has bought 100 million doses – far fewer than needed to vaccinate “a hundred percent of Americans that want the vaccine” by June, as Paul Ostrowski, the retired lieutenant general in charge of logistics for the president’s Operation Warp Speed vaccine program told MSNBC last month.

According to the Washington Post’s sources, Pfizer will be unable to provide any additional doses until June or July because, after the Trump administration declined to purchase an additional 100 million shots, despite being urged to by Pfizer, the company sold the supply to foreign buyers.

An anonymous administration official defended the refusal, telling the Post that, at the time, the government was not going to pay for hundreds of millions of doses of an unapproved, untested vaccine. Ostrowski added on Monday that he was “not concerned about our ability to buy vaccines to offer to all of the American public,” while others in the administration cited other upcoming vaccines, such as the jab developed by Moderna.

Across the border, the Canadian government has snapped up enough doses from both Pfizer and Moderna to vaccinate its population four times over. Though neither have been approved by Canadian authorities, Prime Minister Justin Trudeau told reporters on Monday that “the first Canadians will be vaccinated next week,” several weeks ahead of schedule.

Governments around the world have hailed the vaccines as a turning point in the fight against the coronavirus. However, they now face the difficult task of convincing their citizens to get in line for their jab. Nearly half of US adults say they’ll definitely or probably not take a vaccine, while more than a third of people in the UK will refuse the shot. Facing this challenge, US social media companies have clamped down on the sharing of anti-vaxx content, while former presidents Bill Clinton, George W. Bush, and Barack Obama have volunteered to receive the injection on live TV.

In the UK, Hancock has also promised to get vaccinated on TV, while the government has deployed the army and spy agency GCHQ to crack down on “misinformation” online. Plans to hand out ‘vaccination cards’ in bothcountries have been met with skepticism among civil liberties advocates, however.