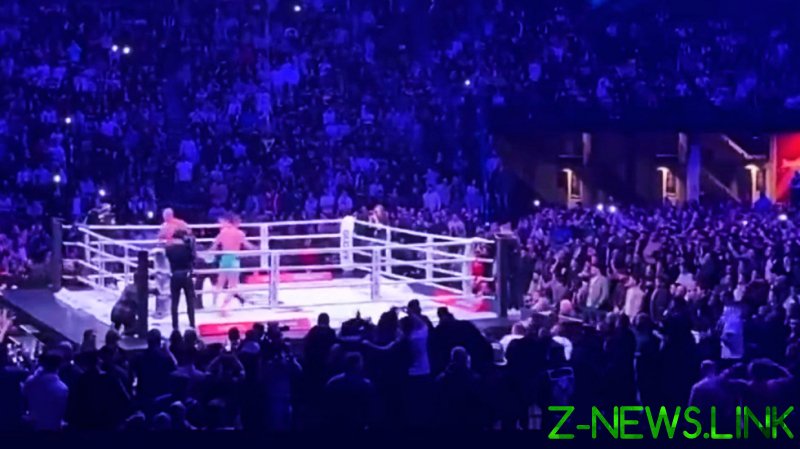 A high-stakes rematch between kickboxing legend Badr Hari and rival Arkadiusz Wrzosek was called off midway through the bout after a crowd brawl erupted during the fight and progressively worsened at GLORY 80 in Belgium.

Hari, one of the most famous kickboxers in history, was seeking revenge from his first fight with Wrzosek in September, when his opponent survived an early onslaught from Hari to score a come-from-behind head kick knockout victory – and it looked as though Wrzosek might have been en route to scoring another win against his iconic opponent after he dropped Hari with a flying knee in the second round.

However, it quickly became apparent that all of the action wasn’t necessarily confined to the ring inside Hasselt’s Trixxo Arena after a brawl became evident in the crowd, quickly growing in size to the point that officials called for the fight to be stopped.

Officials from the GLORY promotion called for calm inside the stadium but their pleas appeared to fall on deaf ears as attendees began throwing chairs and other ringside equipment, prompting the organization to cancel the main event fight between Jamal Ben Saddik and Levi Rigters, and declare Hari and Wrzosek’s bout a no-contest.

The promotion subsequently released a statement in which they said they had been advised by local police to cancel the show once the crowd brawl became impossible to control.

“We never condone or accept behavior that endangers other fans that come to our events to enjoy a night of top sport. Upon the request of the police in the city of Hasselt, we stopped the event after the second round of Hari-Wrzosek.

“We apologize to the fans who did not get to see the end of this bout and the Ben Saddik – Rigters matchup. Also to the athletes who trained so hard and did not get to compete.

“Martial arts is a sport of respect and fair competition inside and outside of the ring.”

The cancelation of the fight card before the main event came despite vocal pleas from both Wrzosek and MMA and kickboxing star Melvin Manhoef, both of whom addressed the crowd after being given a microphone.

Per Dutch publication AD, the riot may be linked to the presence of fans of Polish football club Legia Warsaw, who Wrzosek is a fan of, and Dutch side ADO Den Haag.

The teams reportedly have a friendly relationship and the outlet suggested that the fans could have clashed with crowds of Hari’s supporters, known as the ‘Badr Army’.

Commentators Todd Grisham and Joe Valtellini also became caught up in the violence and were forced to abandon their positions at the broadcast booth.

It remains unclear what exactly prompted the start of the chaos, although there have been some suggestions that it began shortly after Hari was knocked to the canvas during the fight.

“The ref did not stop the fight because of them. More info soon – thanks for all the support.”