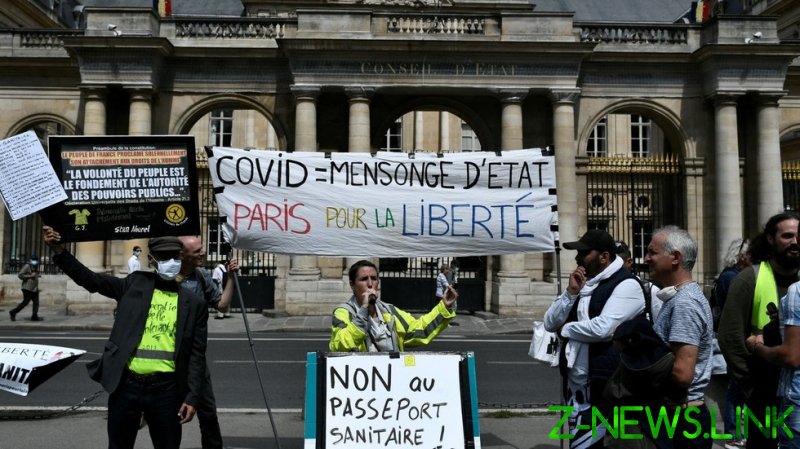 Hundreds of protesters marched through the streets of Paris on Thursday, heading towards the Constitutional Court. The judicial body ruled on the Covid legislation package earlier in the day.

The court rejected some parts of the proposed law, including a provision allowing French authorities to enforce mandatory quarantine on any person who tested positive for the virus. However, the court upheld the majority of the legislation, including the compulsory vaccination of caregivers and the ‘health pass’, as constitutional.

A large crowd of protesters gathered by the court, expressing their anger over the ruling. The court itself was cordoned off, with a heavy police presence in the area, as shown in footage from the scene shared on social media.

The protesters chanted various slogans, including “Macron, we don’t want your pass,” referring to one of the most-criticized provisions of the law. The legislation, expected to be enacted on Monday, is set to make the so-called ‘health passes’ mandatory in France, barring anyone without them from restaurants, bars and other public venues.

The measure, tabled by the government back in July, has triggered wide debates as well as mass protests that have rocked the country for three consecutive weekends. Its critics have accused the government of steering the country into a “dictatorship” and depriving people of their basic rights.

Top officials, including President Emmanuel Macron, however, have brushed off such concerns and insist that the law has been created only to encourage vaccination against Covid-19.