Mask off: Fauci says lack of ‘candor’ from Trump administration about Covid-19 likely cost lives, gets accused of hypocrisy 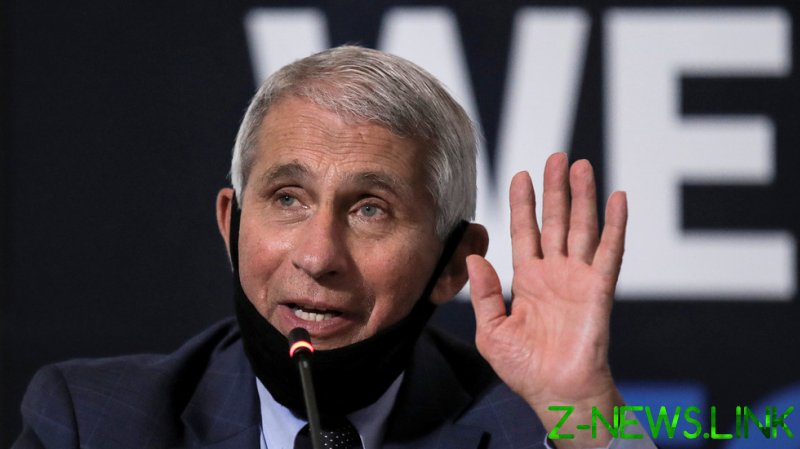 After a Thursday press briefing where he mostly fielded questions about the benefits of working with the Biden administration over Trump’s, Fauci joined CNN on Friday morning and took similar questions.

Asked if a “lack of candor or facts” from former President Trump led to contributed to the death toll from Covid-19, Fauci laid into the previous administration.

“You know, it very likely did,” he said, adding that he didn’t want his words to become a “soundbite,” but continuing anyway.

“I think if you just look at that, you can see that when you’re starting to go down paths that are not based on any science at all, that is not helpful at all, and particularly when you’re in a situation of almost being in a crisis with the number of cases and hospitalizations and deaths that we have,” he said.

Fauci has praised the Biden administration and claimed they will “let the science speak” and restore trust in public health officials.

“We’ve had a lot of divisiveness, we’ve had facts that were very, very clear that were questioned. People were not trusting what health officials were saying, there was great divisiveness, masks became a political issue,” Fauci, who was criticized multiple times publicly by Trump, said.

Fauci’s sudden turn on the Trump administration – which he had previously praised while working with – has led to a wave of criticism, with many using Fauci’s own words, including a recommendation early in the pandemic not to wear masks, to contradict the tone he is taking now.

What wasn’t touched on in Fauci’s Friday interview with CNN is the fact that he directly contradicted a ‘source’-based report from the network, printed only a day earlier, claiming the Biden administration needed to “start from scratch” with vaccine distributions due to a lack of planning from Trump’s team.

Speaking to reporters at the White House only hours after the report was released, Fauci denied this.

“We certainly are not starting from scratch because there is activity going on in the distribution,” he said.