Home / WORLD / Mark Cuban ban on national anthem during NBA games will deepen US divide. But it’s only the start of a new un-American trend

Mark Cuban ban on national anthem during NBA games will deepen US divide. But it’s only the start of a new un-American trend 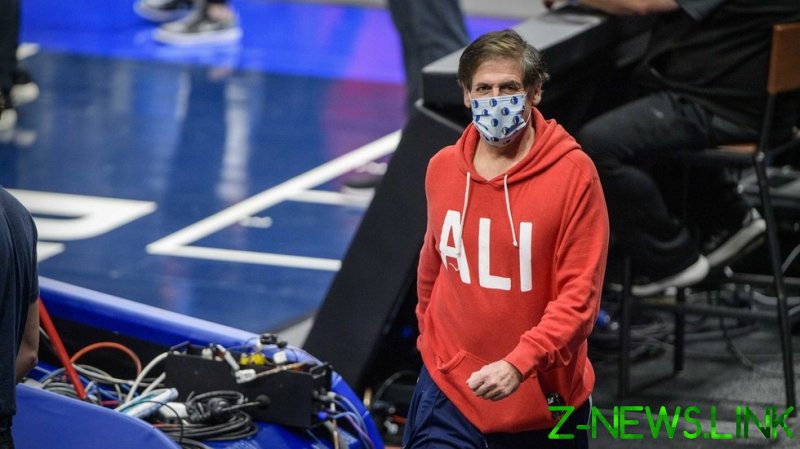 Mark Cuban, billionaire software designer-cum owner of the Dallas Mavericks NBA team, welcomed fans back to American Airlines Center this week for the first game of the season when humans (remember that two-legged species?) were allowed to stand-in for cardboard-cutout spectators ever since the Covid-19 pandemic swept the nation last year.

Mavericks fans were undoubtedly excited to experience some semblance of the ‘old normal’ – sitting in the stands, downing some beers, and feeling like the ‘Year 2020’ had all been a bad dream. Of course it would have been swell not to have to wear a mask between hotdog bits and and sips of Budweiser, but beggars can’t be choosers, right? And then something inexplicable happened, or, rather, didn’t happen. The giddy fans were never invited – as they had been hundreds of times before in the past – to rise and join in singing the famous ‘Star Spangled Banner.’

For those Americans who may have forgotten their history, the anthem was penned on September 14, 1814 by the lawyer and upstart poet Francis Scott Key after witnessing “the bombs bursting in air” during a bombardment of Fort McHenry by the British Royal Navy. It is believed that the anthem was first sung at a sporting event during the Cubs vs. Red Sox 1918 World Series.

Admittedly, standing for the anthem was always a rather tedious and slightly comical affair, which forced fans to exert themselves at that divine moment when they were just getting comfortable in their seats. And as a symbol of patriotism, amid an inebriated stadium of rowdy fans, it certainly left a lot to be desired.

But the thought of not joining in the patriotic sing-along was simply not something a person would ever think to do – unless, of course, they had a wish to be called a ‘commie bastard’ or something equally sophisticated from the peanut gallery. But just like that, at least for home basketball games in Dallas, Texas, the generations-old tradition had been abruptly scrapped without explanation. Most people, however, already have a good hunch as to the reason why.

Cuban’s move comes at a tense period in US history when bread and circuses are no longer the main attraction in town; politics is – or, to be more precise, political correctness and cancel culture are. That much became apparent in 2017 when NFL quarterback Colin Kaepernick decided to take a knee in protest against police abuse during the national anthem. The controversial gesture, which helped to divide Americans and the world of sports like never before, took off again last year with the death of George Floyd during an arrest by a white police officer.

That videotaped tragedy catapulted the Black Lives Matter movement to front and center as the media provided a single explanation for the destructive riots and protests that ensued: ‘the rise of White supremacism and institutional racism.’ Marching in lockstep as is its penchant, the mainstream media never bothered to suggest alternative causes – like poor police training to handle the vast challenges they face every day – for the high incidence of Black deaths at the hands of the police. After all, white people also regularly lose their lives during brush-ups with the police. But I digress.

Perhaps at a slightly less tumultuous time in American history – like when the former US president isn’t being dragged through a second impeachment following a fiercely contested election, and US cities aren’t struggling to rebuild in the aftermath of “mostly peaceful” BLM and Antifa protests, and monuments to famous historical figures were are not being pulled down in the town square like it’s Baghdad circa 2003 – then perhaps Americans might – and that’s a very big ‘might’ – be willing to have a sensible conversation about shelving the national anthem during sporting events. They were never asked, yet it was they who fought all of the wars to keep Old Glory flying over stadiums.

As things stand, millions of Americans now have the feeling, supported by empirical evidence, that everything that was once special and sacred in their country is being torn apart by radicals who have absolutely no attachment to the nation and history, imperfect as it may be.

Mark Cuban, despite everything America has done for him, essentially flipped the bird to the US flag, its anthem and his own fans by hitching his star to the cancel-culture wolf pack. What is really illogical about his decision is that, from a purely business point of view, it’s like shooting his franchise in both feet. After all, US companies learned the hard way that the average American sports fan has absolutely no interest in being dragged into the middle of cultural wars during sporting events. That much was obvious when ticket sales plummeted at the same time the world of sports, as well as corporate America, was advocating fiercely on behalf of Black Lives Matter, as well as donating heavily to its dubious cause.

Today, there is a noxious cloud of corporate greed that hangs over professional sports that was not so visible in the early days. In fact, it’s even tempting to suggest that Mark Cuban believed the singing of the ‘Star Spangled Banner’ was cutting into expensive television airtime that could be better used to hawk beer and automobiles. That would probably be wishful thinking. The bottom line is probably rarely taken into account when these outrageous moves are pushed on the people. CEOs like Mark Cuban have more money than they know what to do with, and they probably know that people will continue attending their spectacles no matter what happens.

What these cancel-culture radicals really want – and are willing to pay any price to achieve – is for the United States to lose every ounce of its national identity, thereby making it much easier to absorb it into the borderless corporate global matrix. Say what one will about Donald Trump, but his very presidency – anchored on the slogan ‘Make America Great Again’ – was predicated on keeping America independent, something that the people now holding power do not want. Under Joe Biden and the progressive radicals in the Democratic Party, which extends to the world of corporate power and beyond, I fear this disastrous, un-American tendency will become increasingly obvious in the next months and years.