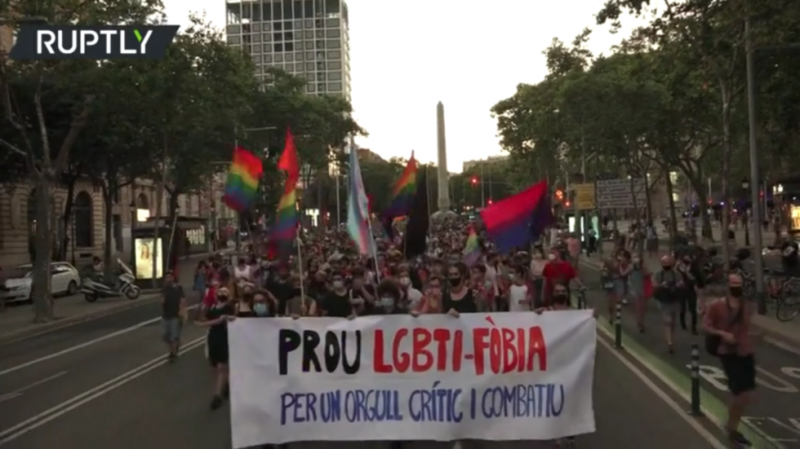 The rally in the Catalonia capital was organized by several local pro-LGBT and anti-hate groups. Police put the attendance at around 500, while organizers said as many as 2,500 joined the procession, which started at 5pm local time and lasted for several hours.

The activists waved various Pride-themed flags and carried banners with slogans denouncing homophobia and supporting freedom causes including “We are not macho, but we are many,” “Liberty or death” and “My pen is my sword.”

A large banner reading “Enough LGBTI-phobia, for critical and combative pride” in Catalan was carried in front of the marching crowd. Some participants dressed up in what looked like fantasy cosplay costumes for the occasion.

The protest was one of several planned in Spain this weekend in memory of Luiz. The 24-year-old was brutally beaten to death last week in the northwestern city of A Coruna in the Galicia autonomous community. Witness accounts say his murder was a heinous hate crime.

The death sparked mass protests across the country earlier this week, with thousands of people joining rallies in several large cities. Some people want the street where the crime was committed to be renamed after Luiz, so that his tragic death is remembered.

The police, who are yet to announce the official cause of the tragedy, have made six arrests in their investigation so far, with the latest two reported hours before the protest in Barcelona. Four adults, including one woman, and two minors have been taken into custody in connection with the case over the last week.