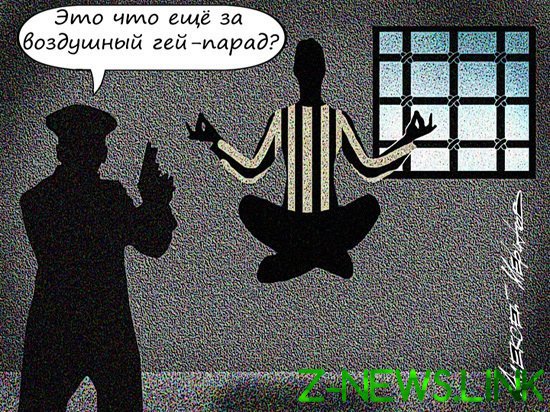 Mizulina wrote to the attorney General: “yoga poses … lead to homosexuality” and riots across the country.

Senator Elena Mizulina has asked the Prosecutor General Yuri Chaika to check the legality of yoga in a Moscow prison (and these classes are suspended). In our disposal were a masterpiece document that formed the basis of the application of Mizulina. This letter of Professor-theologian Alexander Dvorkin, who is considered the chief of the country an expert on sectarianism.

The letter reads: yoga poses cause uncontrollable sexual arousal that will result in homosexuality behind bars.

But this is “flowers”. Here you have “berry” in conclusion Dvorkin: since yoga is now mainly engaged in the condemned unit hotplug (and they cook and carry food for the cameras), the inmates EN masse will refuse to take the soup out of the hands of gays, and this will lead to hungry prison riots across mother Russia! How do you mean “scientific” discovery?

I recall the background. Yoga in prison appeared a year ago with the filing of the PMC in Moscow. Generally, in the European prisons such classes (therapeutic effect is proven) are the norm, for them it allocate a whole separate rooms. But for Russia it was a real breakthrough.

Hundreds of media spoke about yoga in the Metropolitan detention center! Some commented in the spirit of “never thought I live to see that.” The Federal penitentiary service of Russia has recently officially recognized the experiment to conduct yoga in the Moscow insulators successful: those who engaged in it, became in jail less hurt and less to apply to prison doctors. It was already that this experience is spread throughout the detention center of the country, and suddenly…

In insulators, which recently held yoga classes, was raided by Prosecutor’s check. In her time, the training was suspended, and in fact banned.

A source in the Prosecutor General’s office has provided us with a letter to Mr. Dworkin. Did the Agency staff that after much painful hesitation (apparently, there’s a lot of shame that an inspection is carried out on the basis of such a document).

By the way, Dworkin a lot of regalia, including he was Chairman of the expert Council for conducting state religious expertise at the Ministry of justice. But the document he is just a Professor at St. Tikhon Orthodox theological Institute.

Dvorkin is known as the chief accuser of sects in Russia (and was even chair of the Department of cactoideae, led antisemitiska associations), so the first thing he found in yoga is, as you probably guessed, sectarianism. He has studied the origins of the emergence of Kundalini yoga (although in the experiment it was just about yoga, about any of its aspects, not specifically Kundalini), and came to the conclusion that it comes from some “infamous pseudoinductive” sect.

Then the Professor-theologian says about any controversial reputation of yoga in General-and its incompatibility with traditional religions. And this too was fully expected to hear from Dworkin, as replica about the fact that in jail prisoners prepare for future adherents of the sect.

But what really shocked — his knowledge, on the one hand, in the physiology of yogis, on the other — awareness in the criminal prison terms. Here, I think I need to quote from unique the conclusion of Dworkin as a whole.

“In terms of prison practices of this kind can lead to uncontrollable sexual arousal of the practitioner and, consequently, to the emergence of homosexual relations between prisoners of detachment hotblog. And because these relationships are very strongly condemned by, among inmates, the members of hotblog may fall under such condemnation from those to whom they cook and carry food. This, in turn. may provoke a refusal to eat prisoners, finding in the chambers, and further to escalate into a riot of protest nature.”

Further Dvorkin even more surprising to his philosophical arguments (it is no wonder he has a PhD of some American University!): “Instead of re-socialization offers the escape from reality that does not meet the goals and objectives of the prison system as a whole. Instead of repairing, they are encouraged arrogantly “laugh at the fears of all the world.”

At the end Dvorkin demands to stop destructive practices in prisons of Russia.

To be honest, never read anything like, God forbid, never read. But in the 90s Dvorkin, like, even taught journalism at Moscow state University. But then there was a cycle of training in Orthodox seminaries in new York and, apparently, there came on him insight. The problem is that after these letters, people will think that Orthodoxy in Russia is identical obscurantism.

But whatever you read different figures in their requests, public servants (particularly senators) have to “filter”. Mizulina to do that he did not and sent a letter to Dworkin to the attorney General with a covering query. The guardians of the law somehow, has responded quickly (on our journalistic queries they rarely respond) and began the test.

To be honest, I’m interested in how it will conduct. Will examine libido of prisoners who ever do yoga? Whether to interview them, looking sternly in the eye, not whether they became ashamed to say, homosexuals? Or will keep a candle to find confirmation of the theory Dworkin?