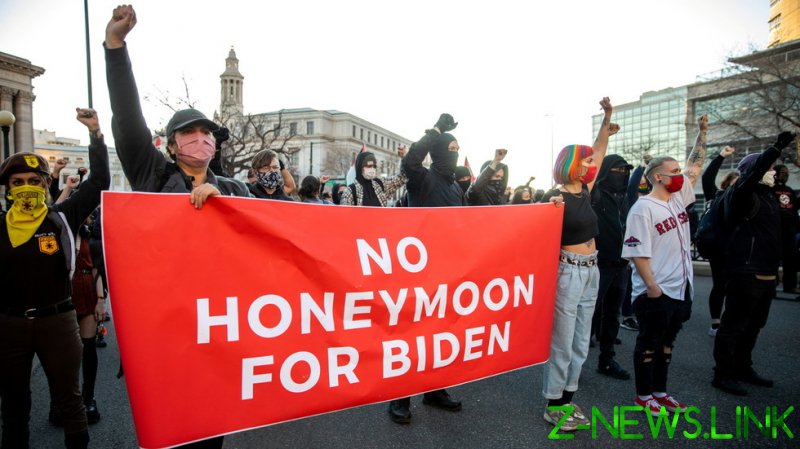 The hook of Politico’s piece – “We’ve learned to love the guy” – comes from Sean McElwee, founder of Data for Progress, a think-tank Biden quoted to argue for his coronavirus relief plan.

Many replies hastened to point out McElwee doesn’t represent “the left.” That’s definitely the case with Brian Fallon – introduced by Politico as executive director of a group called Demand Justice, but not as Hillary Clinton’s 2016 campaign spokesman.

“Personally, I do not love the guy,” quipped Jacobin deputy editor Micah Uetricht.

Peter Daou – an outspoken Clinton activist who has since switched allegiances to Bernie Sanders – described the Politico story as “ridiculous” and said that “progressives who support the Dem establishment do NOT represent America’s left,” which is “vehemently against Biden and the Democratic leadership.”

While Sanders himself cited the overarching need to defeat President Donald Trump in his endorsement of Biden last year, the veteran establishment politician was never the preferred choice of the socialist and progressive wing of the Democrats. The party has countered this with a strong public relations campaign about how the progressives can “push Biden left” once he is in office.

As some of the holdouts noted, the Politico piece has all the hallmarks of this “manufactured” consent.

That doesn’t change the fact that it brings up by name several prominent progressives who seemed to be eager to work with the new administration, from Rep. Pramila Jayapal (D-Washington) to Sanders’s campaign manager Jeff Weaver and advisers Matt Duss, Analilia Mejia and Josh Orton.

Meanwhile, Evan Weber, political director of the environmentalist Sunrise Movement, said they are having meetings on a “weekly, near daily basis” with Biden climate adviser Gina McCarthy, climate envoy John Kerry and others.