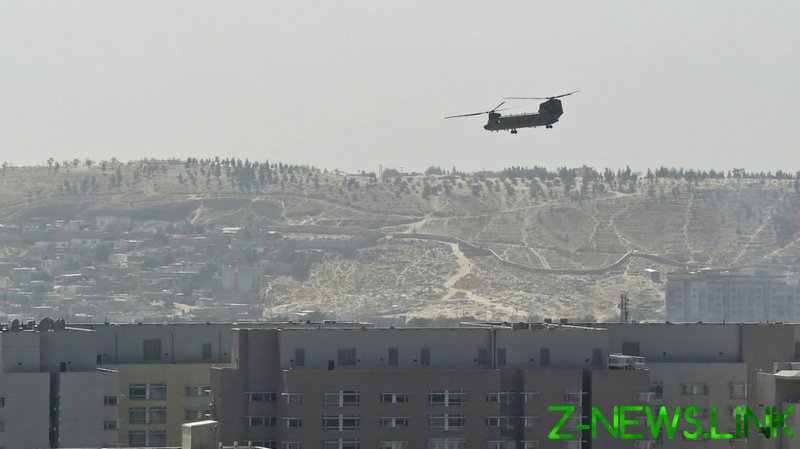 At least two CH-47 Chinook tandem rotor heavy transport helicopter has been spotted at the compound, making the footage seem eerily similar to that shot in South Vietnam in April 1975, amid the hasty evacuation of US diplomatic staff as the capital city of Saigon fell. Back then, helicopters of that type were landing on the embassy’s roof to pick up diplomats as North Vietnamese troops were closing in onto the capital.

Both US President Joe Biden and now Antony Blinken have rejected any similarities between the hasty pullouts. On Sunday, Blinken was directly asked whether the Kabul withdrawal would become Biden’s “Saigon moment.” Speaking to ABC, he responded by saying it was “manifestly not Saigon.”

“Remember, this is not Saigon. We went to Afghanistan 20 years ago with one mission and that mission was to deal with the folks who attacked us on 9/11. And we have succeeded in that mission,” Blinken told CNN.

Others found the Vietnam vibes of the ongoing retreat even more embarrassing, however, given that Biden had explicitly promised that the withdrawal from Afghanistan would not turn into another fall of Saigon.

The US president insisted early in July that the Taliban’s capabilities were “not remotely comparable” to the North Vietnamese forces and no hasty retreat would happen.

The Afghan government seemed to have effectively collapsed on Sunday, when Taliban forces entered the outskirts of Kabul. The militants called for negotiations, claiming they wanted to avoid an unnecessary battle for the city and the loss of civilian lives.

Afghan President Ashraf Ghani has already fled the country, reportedly for neighboring Tajikistan. While his office is struggling to explain his whereabouts, stating it “cannot say anything about Ashraf Ghani’s movement for security reasons,” Ghani’s departure was confirmed by Abdullah Abdullah, the head of the Afghan National Reconciliation Council.