Home / WORLD / Mandate or no mandate? Harris seems to contradict Biden on MASKS RULE – their central campaign promise on Covid-19

Mandate or no mandate? Harris seems to contradict Biden on MASKS RULE – their central campaign promise on Covid-19 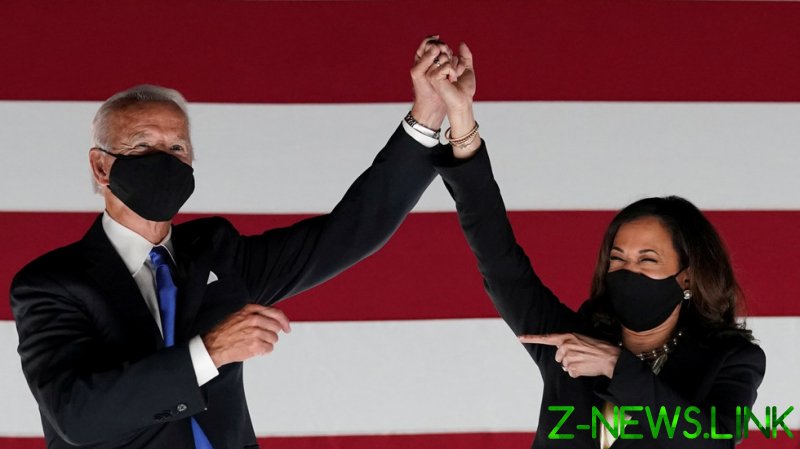 A Sunday CNN interview with Harris has people scratching their heads over where the campaign stands on a mask mandate. There is currently no federal mask mandate in the US, but various cities have made them mandatory when going into businesses. President Donald Trump’s refusal to enact a federal mandate has been a point of criticism for those opposed to him being reelected in November.

Speaking with Dana Bash, Harris said Biden would make mask-wearing a “standard,” but not a mandate.

“It’s not about big brother. It is simply about saying what a leader says in times of crisis. You look at world war II, you look at the great depression where leaders said, we each have to sacrifice for the sake of the nation and the collective. And that’s what this is about,” Harris said.

Asked directly whether mask-wearing would be a federal mandate, Harris replied, “It would be a standard.”

This appears to contradict what Biden has been promoting. Just the night before Harris’ interview, Biden tweeted that, as president, he would enact “national mask mandates” as part of his plan to deal with the current pandemic.

The disparity in messages between Biden and Harris is already being capitalized on by critics.

“For a campaign that has been so hyper-focused on one key issue it’s alarming how much trouble they’re having staying on the same consistent page,”tweeted Matt Whitlock, senior advisor for the National Republican Senatorial Committee.

Harris has even been with Biden when he has directly called for mask mandates in the past. After he promised he would make every US governor require citizens wear masks in public at a press appearance last month, Harris began to speak and praised the former vice president’s words as “true leadership.”

“What real leadership looks like is Joe Biden, willing to speak up, sometimes telling us the stuff that we don’t necessarily want to hear but we need to know,” she said. “And the need for this mandatory mask wearing will also be about what Joe has articulated, and what a Biden/Harris administration will do.”

Trump has slammed Biden’s repeated calls for the mandate, saying last month it would hurt the economy and it was Biden’s attempt to “politicize a pandemic.”