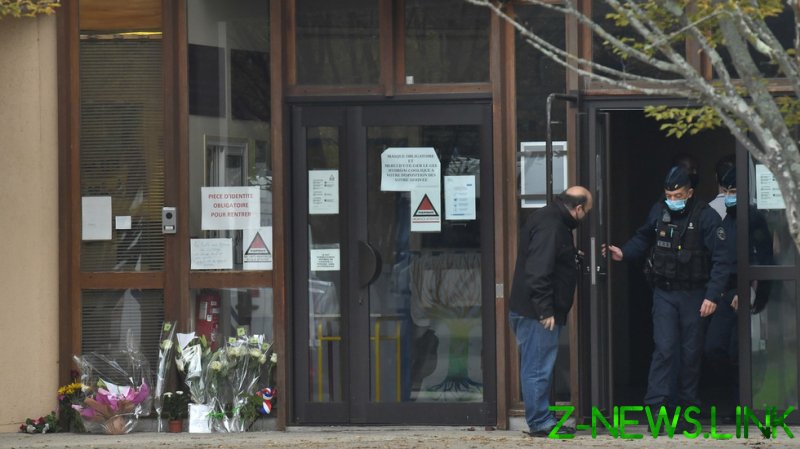 The 18-year-old murder suspect, who was shot dead after a brief shootout with police in the town of Eragny, “enjoyed a refugee status” and “held a residence permit issued on March 4 and valid until March 2030,” anti-terrorism prosecutor Jean-François Ricard said on Saturday.

He added that the teen was unknown to authorities and had no convictions except for “cases of damage to public property and violence in meetings” when he was a minor.

The ethnic Chechen’s family apparently emigrated to France from Russia in the 2000s.

A total of nine arrests have been made in connection with the murder that took place in the Paris suburb of Conflans-Sainte-Honorine, including several people close to the suspect. One of those arrested has a half-sister who is a member of the Islamic State (IS, formerly ISIS) terrorist group, the prosecutor revealed. An investigation into the attack and how many were actually involved is currently underway.

The murder victim has been identified as 47-year-old history teacher Samuel Paty. The attacker posted a graphic image on Twitter after the beheading and took credit for the murder, according to Ricard.

He said the suspect had showed up at Paty’s school and specifically asked for the teacher’s whereabouts.

Paty had received multiple threats in recent days, due to reportedly having shown caricatures of the Prophet Mohammed to his students, in what has been described as a class on freedom of expression.

French President Emmanuel Macron has promised swift justice and called for unity in the aftermath of the attack.

“I think tonight of him, of his family,” Macron said of Paty. “Our unity and firmness are the only answers to the monstrosity of Islamist terrorism. We will stand up.”

The attack is being investigated as a “murder linked to a terrorist organization,” according to officials.

People gathered outside the Conflans-Sainte-Honorine high school on Saturday to pay their respects to the deceased teacher, some bringing flowers and carrying signs supporting the freedom of expression.