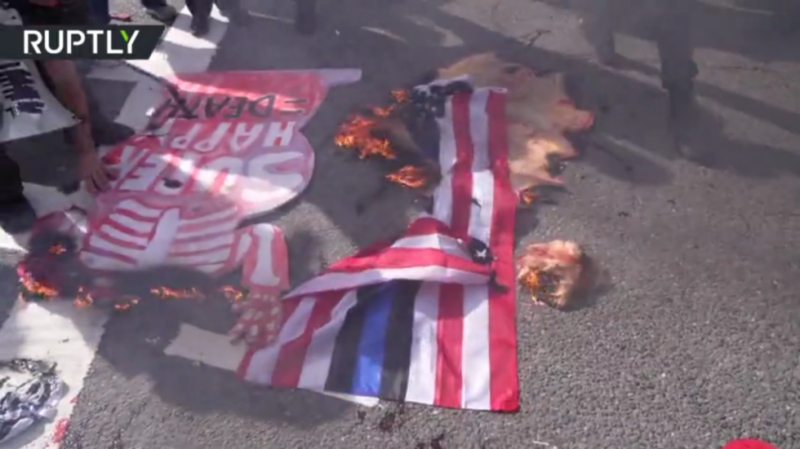 Two competing rallies were held, totaling roughly 1,000 people between them, in Boston’s Copley Square on Sunday.

The ‘Peaceful Protest Against Democrat Violence’ was organized by the Super Happy Fun America group, the same group responsible for the controversial Straight Pride Parade in 2019.

The group called on their political opponents to denounce “the violent actions of their supporters.”

“We’re here to have a peaceful protest against Democrat violence,” activist John Hugo told local media. “As you see, the Democrats are here in force… to cause violence and prevent our free speech.”

Counter-demonstrations were held by several groups such as Solidarity Against Hate-Boston, which organized the ‘Kick Fascists Out of Boston’ rally, as well as the ‘The Freedom Fighter Coalition’.

While one activist told the media that Trump is “trying to steal these elections,” some fellow demonstrators were burning an effigy of the president.

At one point, a US flag was set on fire, and afterwards one of the demonstrators appeared to drink blood from a heart, though it’s unclear whether it was a prop or a real heart.

Despite large contingents of heavily-armed state and local Boston police officers dividing the two groups with the use of batons and steel barricades, there were sporadic scuffles throughout the early afternoon, with police forced to intervene to separate the rival factions.

At least two arrests were reported after anti-Trump protesters reportedly assaulted officers. The Trump supporters were eventually escorted from the square by law enforcement.