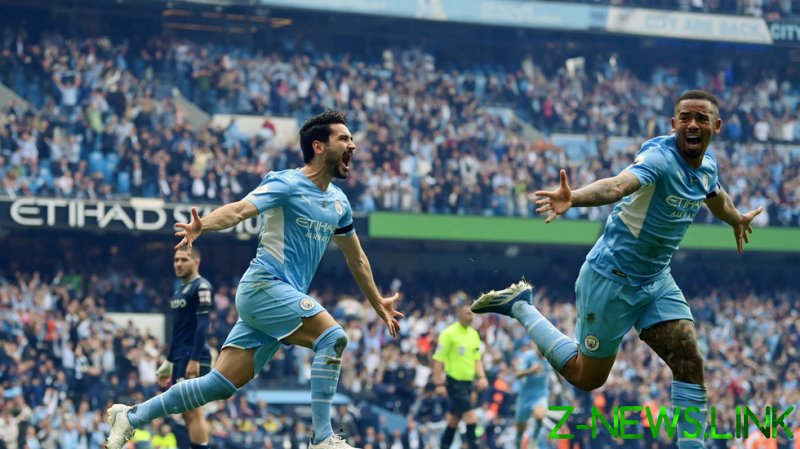 Manchester City scored three goals in five frantic second half minutes to come from behind against Aston Villa to clinch yet another Premier League title, foiling arch rivals Liverpool in the process in what was an incredibly tense final day of action in the English top flight.

Both club had appeared to be in the ascendancy at various points throughout the afternoon but Liverpool appeared to be in pole position after their former skipper Steven Gerrard guided his Aston Villa team to an unlikely 2-0 lead away to Manchester City.

Liverpool, who trailed early at home to Wolves, had drawn level and pushed forward desperately in the second half in the knowledge that a win – and City losing or drawing – would send the Premier League crown to Anfield.

However, in five famous minutes on the blue side on Manchester a brace from Ilkay Gundogan and a single strike for Rodri proved enough to clinch the league title by a single point from Jurgen Klopp’s Liverpool.

Nerves could be felt at both Anfield and the Etihad Stadium for large parts of Sunday afternoon. In Liverpool’s case, the nail-biting began early after Pedro Neto scored an opener for Wolves after just three minutes of what was a frenetic first half.

Liverpool were without the injured Mo Salah and Virgil van Dijk, both of whom were restricted to the bench after picking up knocks in the title run-in – a factor which certainly wasn’t helped when creative fulcrum Thiago was forced off later in the game due to a hamstring complaint.

Sadio Mane levelled the scores midway through the first half – but just when it appeared the floodgates might swing open, Wolves found a way to get between Liverpool’s marauding attackers Jose Sa’s goal.

The Anfield roar grew louder when news of a second Aston Villa goal reverberated around the ground, and even more so when the identity of the goalscorer – former Liverpool great Philippe Coutinho – became known.

The pendulum was swinging but again tipped towards City with their sensational second half fightback.

Liverpool eventually scored a second and a third through substitute Salah and Andy Robertson but both were ultimately in vain as Guardiola’s side clinched what was their fourth league title in five seasons.

At the other end of the table, Leeds United are celebrating after avoiding relegation to the Championship on the final after a 2-1 win at Brentford, while it was Burnley who surrendered their Premier League status after losing by the same scoreline at home to Newcastle.

Both Norwich and Watford had already been confirmed as relegated.

Elsewhere, Tottenham Hotspur will take the fourth Champions League position after they routed Norwich 5-0. Arsenal managed a 5-1 win against Everton but it wasn’t enough to move past their London rivals into the top four.

Manchester United were defeated away to Crystal Palace but will compete in the Europa League next season following West Ham’s defeat to Brighton.

Salah, meanwhile, will have one reason to celebrate after he shared the Premier League Golden Boot away with Spurs’ South Korean forward Son Heung-min who both scored 23 goals, five more than Manchester United’s Cristiano Ronaldo.