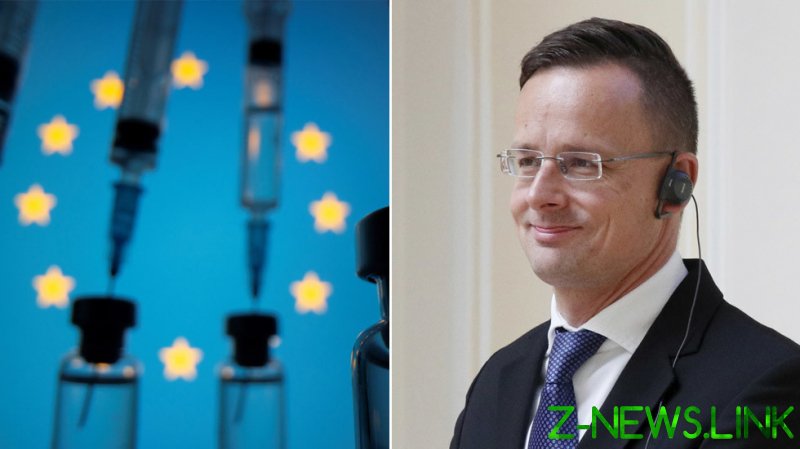 Peter Szijjarto spoke to RT on Sunday, a couple of days after he received the Russian-made Sputnik V vaccine. The minister said he has not experienced any side effects.

I had not felt anything neither during vaccination nor after it. I received the first shot in the evening of Friday, so I can tell you that so far so good.

Hungary is set to receive around 700,000 additional doses of Sputnik V in the next two weeks, Szijjarto confirmed.

The decision to not wait for the EU regulators and independently procure vaccines from Russia and China has greatly boosted Hungary’s vaccination drive. Roughly a half of those who have received a Covid-19 shot in the country were vaccinated with one of the “eastern vaccines,” according to Szijjarto.

“More than 1.5 million Hungarians have already been vaccinated and this would have not been possible if we had not decided to buy vaccine also from the East. Vaccine is not a question of ideology for us, it’s a matter of saving lives,” he said.

Around 700,000 have received the first shot of an eastern vaccine, so it’s easy to calculate in what a worst position we would have been if we had not bought Chinese and Russian vaccines.

Speaking on the shortcomings of the joint EU response to the pandemic and the issues the bloc encountered in its unified vaccination rollout, Szijjarto said that making it political from the start was a major mistake, and unlike some western European countries, Hungary has never taken an ideological approach to vaccination.

Budapest’s experience with the EU’s vaccination drive has proven to be frustrating, the foreign minister said. While shortages of the vaccines alone would have been rather understandable and tolerable, the highly-politicized criticism it faced over turning to the East was unfair.

“I wouldn’t say a bad word… if they had not attacked us for looking for different directions. That was the most frustrating that while it became obvious that the shipments managed and coordinated by Brussels are not satisfactory, we were under attack by the same people, by the same bureaucrats, by the same politicians [because] we want to buy additional vaccines for our own people.”

Szijjarto clarified that the bloc’s rules clearly allow the members’ national regulatory bodies to grant medical drugs approval for emergency use without waiting for the rest of the union.

“That’s what made us a little bit fed up that the way Hungary has approved Sputnik was considered in the western part of Europe and the global media as we had made something against the European regulations which is not true.”

The situation seems to be changing now, with more and more countries in Europe calling for Sputnik V to be approved. This is not the first time the bloc’s members have quietly followed Budapest after initially attacking it for its actions, Szijjarto noted.

“We are actually used to that. Whatever we are doing here in Hungary is immediately attacked, and a couple of months or years after everybody follows,” the minister said. “Of course, no one gives the credit to us for being the first, but this is not how politics works.”