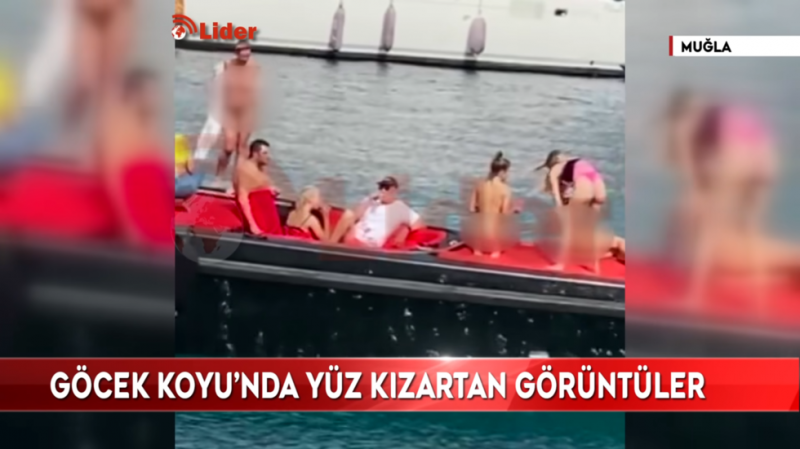 Footage of a group of scantily clad women taking pictures of each other on a slick yacht went viral after being picked up by media in the majority-Muslim nation. The Lider Gazete, a news outlet based on Turkey’s south coast, reported on Tuesday that the clip had been taken near Mugla province, across the water from the historic Greek island of Rhodes. Locals reportedly spotted two men and six women taking part in the steamy session.

Kiev-based Strana has since reported that a number of Ukrainian women had been detained by authorities over the saucy photoshoot, which has enraged many. One local told the media that “seeing this kind of image during the lockdown period, and during the holy month of Ramadan, caused great outrage.”

One woman, reportedly a Ukrainian national involved in the incident, has since spoken about the ordeal on social media. She claimed that the video had been taken from a neighboring yacht, and police only got involved after the public outcry. “As you know,” she said, “in Muslim countries it is generally better not to take naked photos. If you do, then it is better to do it as discreetly as possible and hide the location.”

According to her, the group stripped off unaware that they were being filmed from afar. She added that the group has since been released by cops after giving statements.

Last month, a group of models from former Soviet nations, including Ukraine, was expelled from the United Arab Emirates after staging a nude photocall on the balcony of a high-rise residential building in Dubai. Again, the footage that went viral was filmed by a startled neighbor.

Authorities in the Gulf state said that “the recently publicized photoshoot contravened UAE law” and added that “the individuals involved will be deported.” The stunt is said to have contravened laws banning indecency and pornography.

The organizer was later identified as Vitaly Grechin, a Kiev-born businessman who reportedly claimed to have had a personal relationship with former US president Barack Obama, and even helped with the financing of the Democratic politician’s election campaign.

Currently behind bars over the racy shots, Grechin has apologized for offending his host nation. “Clearly, there was no intent to offend anybody. Clearly, [the models] were not climbing a mosque naked,” he said.

He claimed that the women were ‘not instructed’ by him to pose naked. “It happened within a minute,“ he insisted. “One girl said ‘I’m going to take a picture, and then it was ‘Me too,’ ‘Me too,’ ‘Me too’… It was a passionate decision to take a photo which wouldn’t show their private parts.”

The UK’s MailOnline reports that Grechin revealed that he had paid for around 20 women, apparently his ‘friends,’ to fly to the Gulf nation free of charge for a lockdown-busting minibreak, at an overall cost of around $10,000.