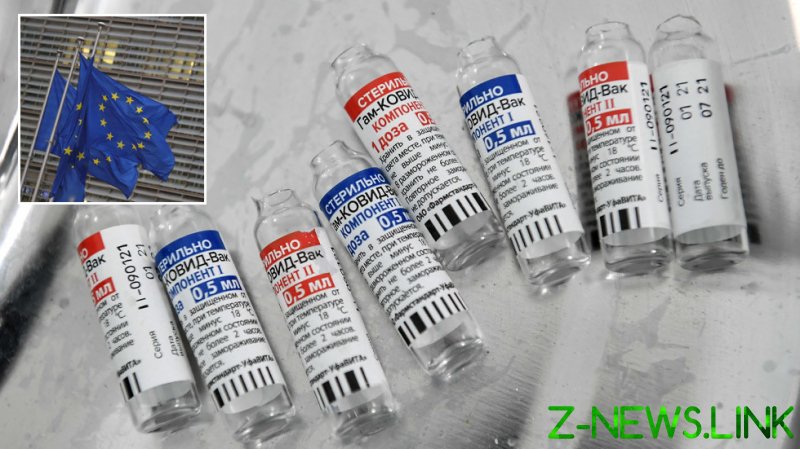 Alexander Gintsburg, the director of the Gamaleya Institute where Sputnik V was developed, told RIA Novosti on Monday that the EU “is in no hurry” to sign off on the jab. This, he claimed, is because they “fear its strong attributes, thanks to which it may end up outcompeting the products that the European bureaucracy is promoting at home.”

Since March, the vaccine has been under rolling review by Brussels’ central regulator, the European Medicines Agency (EMA). However, while almost 60 countries across the world have already authorized the formula, EU member states have been told to keep waiting for the watchdog’s verdict. Despite this, many have already signed deals to use or produce the vaccine.

Late last month, EU Internal Market Commissioner Thierry Breton told a French television station that “we have absolutely no need of Sputnik V.” The comments were greeted with surprise, given a number of leaders have expressed concern about the bloc’s sluggish procurement of supplies. Breton’s words sparked protest online and anger from Russian politicians, who pointed out that the EU is currently engaged in a stand-off with the UK over orders of AstraZeneca’s formula, in efforts to secure as many shipments of vaccines as possible.

On Sunday, Russia’s Foreign Intelligence Service (SVR), the country’s counterpart to the CIA, warned that there were a number of attempts by EU officials to discredit the Russian jab. As an example, the agency pointed to Breton’s statement “about the rejection of the Russian coronavirus vaccine even in the face of the growing threat to the lives of hundreds of thousands of EU citizens.”

Over the weekend, Russian Deputy Prime Minister Tatyana Golikova renewed her call for the country’s citizens to sign up for immunization. She claimed that “the number of people wishing to be vaccinated has increased dramatically” in recent weeks, despite slow uptake in some regions of the country, particularly the republics of the North Caucasus. Almost 7 million people have received at least one dose, putting Russia’s vaccination efforts among the most successful in Europe in absolute terms. However, on a per capita basis, it still lags well behind countries such as the US, UK, and Israel.

Kirill Dmitriev, the head of the Russian Direct Investment Fund (RDIF), which financed the formula, has said that all “willing Russians” could be vaccinated by June. However, that may not be the end of immunization efforts. Last week, Gintsburg told reporters that his team was working on the most effective technologies to rapidly update Sputnik V to deal with any vaccine-resistant strains that might emerge in the future.