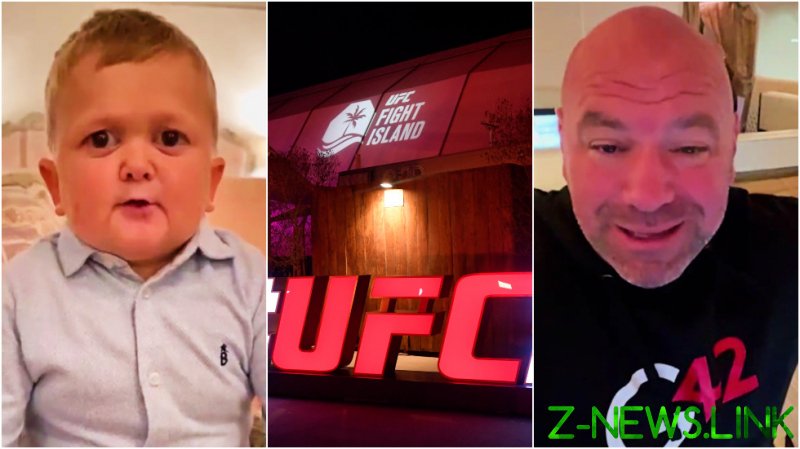 The tough-talking internet favorite will have a keen eye on the combat on offer as the UFC returns to the Middle East, where one of his allies, Islam Makhachev, faces a crunch clash with Dan Hooker.

Russian showman Hasbulla will also be keeping watch on countryman Petr Yan, who returns to action for the first time since March when he takes on Cory Sandhagen in a co-headliner bantamweight blockbuster.

Before any of that, Hasbulla, from ex-champion Khabib Nurmagomedov’s stable, will be following in the footsteps of the Dagestani, who is well accustomed to meetings with White, not least when the overlord attempted to persuade him to reverse his retirement decision last October.

“Dana White, I’m coming to Abu Dhabi,” announced Hasbulla to his vast social media following, looking stern and ready for business in a neat shirt. “See you, and be ready.”

Ever ready for a set-piece announcement, White spoke from a plane as he voiced his excitement about meeting a boy beloved of arguably his most successful ever fighter’s entourage.

“Hasbulla, I’m on the plane,” White told him. “I’m on my way to Abu Dhabi. I cannot wait for our meeting and I cannot wait to see you.”

Upon hearing that Hasbulla has backed Makhachev to beat him, lightweight Hooker retorted that the lucky charm is welcome to be on his opponent’s team.

Hasbulla was not impressed. “Dan Hooker: listen to me, my brother,” he warned in response. “Smash you. Be careful.”

Earlier this month, Nurmagomedov’s trainer, Javier Mendez, called Hasbulla a “tough negotiator” as the pair sat together at a table.

“[He] is not playing around,” reported Mendez, adding the familiar call of “send me location”.

“First he takes on the water cooler and destroys it. Then the elevator gets destroyed. Who’s next – Tonka Truck? Go.”

Another observed: “The greatest finally takes some time off his busy schedule to meet with Dana.”

Professional surfer Kelly Slater said that a pay-per-view fight involving Hasbulla would rake in three times as much as a scrap between former UFC champion Conor McGregor and ex-rival Nate Diaz.

“Hasbulla is massive,” a fan account said alongside the footage of him revealing his plan to meet White. “That’s the tweet.”