Home / WORLD / Majority of Trump voters and 41% of Biden fans want to SECEDE from union, see ‘other’ party as totalitarian – poll

Majority of Trump voters and 41% of Biden fans want to SECEDE from union, see ‘other’ party as totalitarian – poll 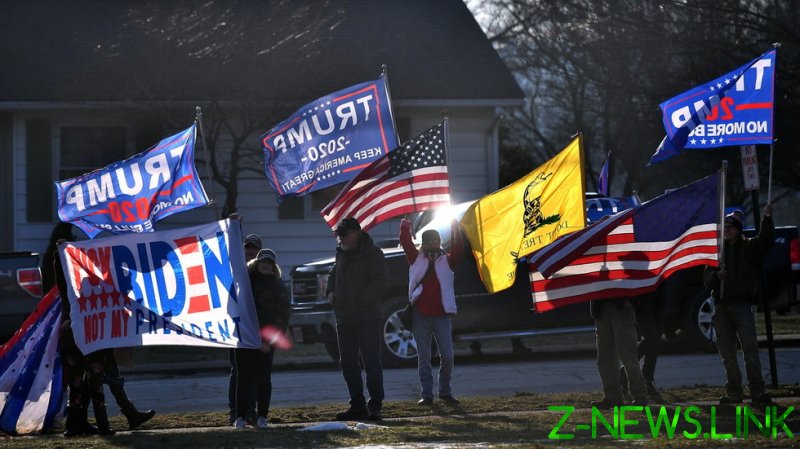 Some 52% of Trump voters surveyed by the Center for Politics at the University of Virginia believe the country would be better off if Republican-voting (‘red’) states seceded from the union to form their own nation, according to a poll published on Friday. A quarter of such voters strongly agreed with that sentiment.

It was not only Trump voters who thought it was time for the United States to disunite. Some 41% of Biden voters also approved of the idea, though a smaller percentage – 18% – felt strongly about it.

Arguably more disturbing were the implications for the “other” party if secession did not occur. A sizable majority of both Trump and Biden voters agreed with the statement that “if our society so wants, it is the duty of every true citizen to help eliminate the evil that poisons our country from within.” Certainly no one’s coming forward defending (or identifying as) evil, but it would appear both parties are referring to each other when using such a term.

A whopping 80% of Biden voters and 84% of Trump voters agree that elected officials from the other party are “presenting a clear and present danger to American democracy.”

As far as ‘values’ are concerned, almost 90% of Trump voters believe that the Democratic party wants to “eliminate the influence of traditional values in American life and culture,” while 78% of Biden voters feel the same – substituting “progressive” for “traditional.”

It is not necessarily hate or disdain driving the divide – in many cases, it’s fear.

Biden and Trump voters alike (80% and 82%, respectively) worry that they or someone close to them “might experience personal loss or suffering due to the effects of [the opposition party’s] policies in the future.”

Almost three-quarters of both parties have lost faith in the First Amendment, suggesting “some media sources on the extreme [Right/Left] have become so untruthful that they should be censored to stop the spreading of dangerous lies.”

Both parties consider media that favor the opposite ‘side’ to be a de facto arm of the relevant party, with 77% of Democrats deeming the likes of Fox News a fake-news-sodden press organ of the GOP, while 88% of Republicans write off the likes of MSNBC as a hive of liberal shills.

In fantasizing about how to fix their divided nation, a sizable minority on both Left and Right have given reign to their inner totalitarian, suggesting “It would be better for America if whoever is President could take needed actions without being constrained by Congress or the courts.” While that figure stands at just 46% for Democrats and only 44% for Republicans, both ‘sides’ were quite open about their desire for a “powerful leader” who could “destroy the radical and immoral currents prevailing in society today.”

Fully 82% of Republicans were willing to embrace such a strongman (or strongwoman), and even 62% of Democrats approved of the idea. A similar portion believed there were “many radical, immoral people trying to ruin things” and that “our society ought to stop them.”

The pollsters stopped short of asking outright who those radical, immoral people might be, perhaps assuming it was the other party being scapegoated – though the vitriol against such “radicals” met with considerably more bipartisan approval than the political divide itself.

American media – particularly of the mainstream variety – often bemoan the lack of national unity, blaming it primarily on Trump and his supporters. Even Mediaite’s report on the poll that showed the desire for secession is bipartisan seemed designed to further divide the population, declaring in its headline that “Trump voters” were the ones demanding disunity, even as more than 40% of Biden voters called for the same thing.