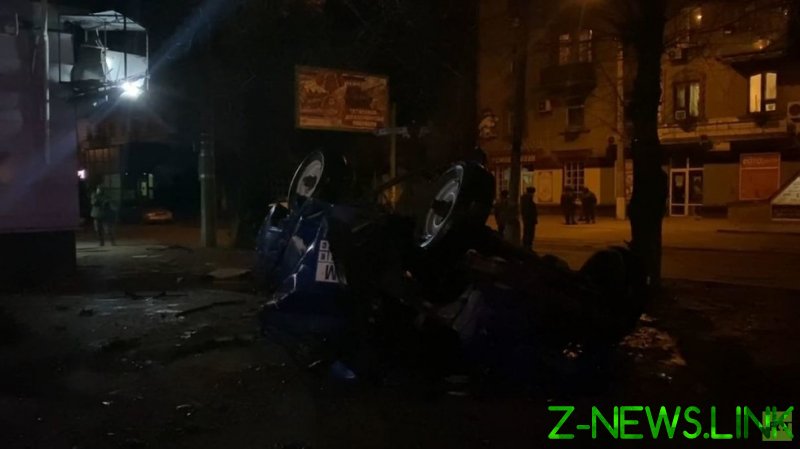 A powerful explosion has rocked central Lugansk, in eastern Ukraine, late on Monday. The blast took place outside a building housing the office of the Joint Centre for Control and Coordination (JCCC) on the ceasefire and stabilization of the demarcation line in the Lugansk People’s Republic (LPR).

Unverified footage circulating online shows a heavily damaged vehicle on fire outside of the building. The blast shattered the building’s windows and set off the alarms of multiple cars parked outside.

The head of the LPR mission to the JCCC and his driver were wounded in the explosion, the mission said, without clarifying any details on the severity of their injuries. The scene has been secured by the emergency services of the self-proclaimed republic, it added.

The blast comes amid the ongoing escalation in eastern Ukraine, with the self-proclamed LPR and Donetsk People’s Republic (DPR) accusing Kiev of heavy shelling across the contact line, established by the 2014-15 ceasefire agreements. The breakaway republics have also suffered a string of explosions and saboteur attacks, which they blamed on Kiev forces. Top officials of the two republics claimed the escalation comes in preparation of a full-blown assault by the Ukrainian troops.

Ukraine, however, has denied its involvement in the incidents, insisting that it has no plans to retake the breakaway region by force. Ukrainian officials have also accused the rebels of violating the ceasefire themselves, including blowing up their own infrastructure to frame Kiev.