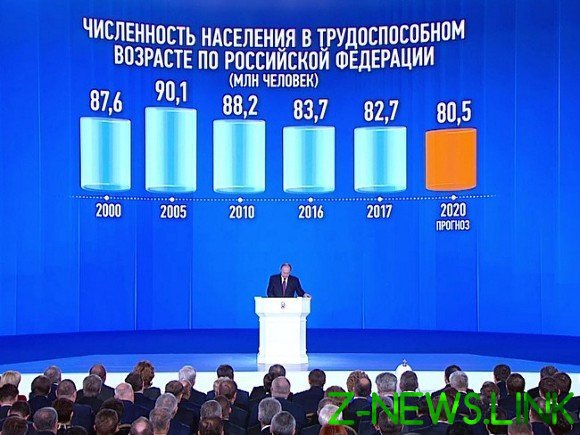 After meeting with figures from Rosstat immediately the question arises: how to combine the bravura report on the increase in the number of centenarians with data on the decline in the birth rate?

In late August, several Russian media have published life-affirming news about demographics. First, it turns out that Russia, by leaps and bounds, a growing number of centenarians, i.e., those who are 100 years or more. Second, mortality from external causes — accidents, suicides and the like — has declined to the lowest level since 1965. All this, of course, citing the data of Rosstat.

Another positive news in this series — announced recently by health Minister Veronika Skvortsova another increase in the first half of 2019, the average life expectancy of Russians from the average for eight months — from 72.9 to 73.7 years.

Given that a large part of this encouraging news came on Friday, August 23, the impression that the government is struggling to create citizens with a positive attitude for the weekend. Meanwhile, recently, based on the figures the same statistical Agency, “Rosbalt” reported the avalanche growth of population decline in Russia. Officially in 2018, it amounted to 218 thousand, and to them really may need to add another 500 thousand people…

Naturally the question arises: how to combine the data of Rosstat the growth in the number of centenarians and the decline in the birth rate? In other words, is to figure out — do we rejoice the achievements in the demographic policy, to laugh at the tricks the government PR people or resent them?

With regard to communication about the growing number of centenarians, to begin with, we note that the increase of 17% in 2018 compared to 2017 — fit, in General, within the usual statistical fluctuations. In one year 17% higher, and another 20% less. But the decline in fertility in one year almost 200 thousand children, as it happened in 2017 — this is serious. Because the number of centenarians in Russia is negligible — just over 20 thousand (or slightly more than 0.01% of the total population). Accordingly, the oscillation data in the framework of this category of persons forecast for the total demographic situation in the country is not doing.

See also:  Ukraine set a world record for the pace of GDP decline

Another category in which supposedly there has been progress — reduction of mortality in Russia from “external causes”. That is, from homicides, suicides, road traffic accidents, accidents and so on. According to Rosstat, indeed, in 2018, most of these external causes died “only” 144612 people, which is less than at any time since 1965.

However, there is the “but”, or rather, two. First, mortality from external causes in the years of peace (or, at least, when the country engaged in large-scale wars) is not the largest part of the list of causes of death. Those of 144.6 thousand deaths from external causes in 2018 is only about 8% of the total number of deaths in the last year of the Russians. In total in Russia in 2018 has left this world more than 1.8 million people. And the main causes of death (in total, more than 60%), as before, are the diseases of the circulatory and oncological diseases.

But pleasing the bosses ‘ eyes annually increasing average life expectancy and for several years declining in absolute numbers the mortality rate, as we have repeatedly stressed, are not a result of improved medical care and likely low quality of the statistics.

In rural areas in Russia today, if someone does not know, there is no health care good or improved, or even bad. For the simple reason that there is an elementary eliminated aid stations. Of course under the policy of “optimization”. Taking into account this fact in the countryside, apparently, is often just no one to lead the mortality statistics. This conclusion, as we reported, confirmed by indirect data the Federal state statistics service.

See also:  Switzerland is ready to enter bezviz with Ukraine

So, in 2016, the number of skilled workers of agriculture and forestry, aquaculture and fisheries amounted to 2,486 million, and in 2017 it dropped to 1,765 million. That is the year decreased by 721 thousand. You can, of course, to assume that these people due to the bankruptcy of agricultural enterprises moved to the city. And partly it’s apparently true. The number of urban skilled workers over the same period increased by about 200 thousand people. But where is another half? For example, unskilled urban workers during the same period of time even fewer. The number of pensioners has increased marginally. But almost 500 thousand decreased the number of self-employed in the village. What happened to these people, if neither in the city nor in the village, they didn’t show up? Not impossible in the end? The answer to these tough questions, most likely, quite sad — they’re just dead, becoming for national statistics, reaching, as in Stalin’s time, “from success to success”, “dead souls”.

Accordingly, these half-vanished rural shower should most likely add to the mortality statistics. In this case, the decline in the population will increase from official 218 thousand to 700 thousand, at least. Just like in the “dashing nineties”.

Agree, on this background, the refreshing message about the increase in the number of centenarians in Russia look a complete mockery.