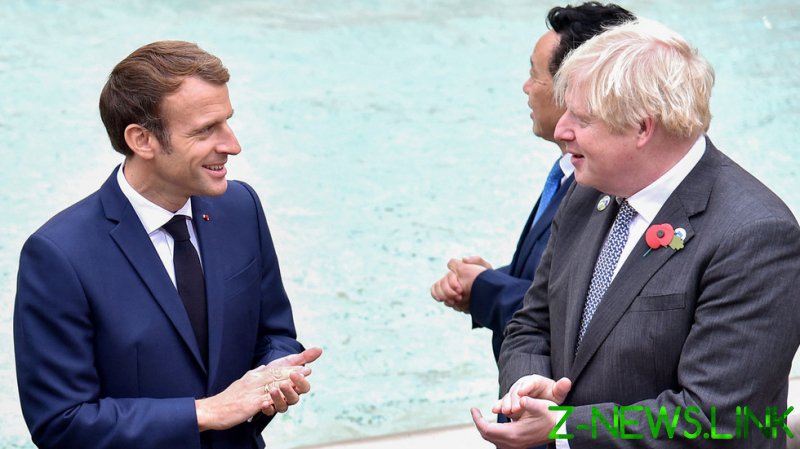 The leaders agreed on a “de-escalation” in the “coming days,” a French presidential official told BFM TV after Macron and Johnson held closed-door talks on the sidelines on the G20 in Rome, Italy.

Macron wanted to convey to his UK counterpart a message of “seriousness and respect for a great partner of France,” the official said.

“We expect that [the UK] respects the rules of the game and its signature” on the 2020 UK-EU trade deal,” the source added. “Even if Boris Johnson still tries to make it a Franco-British issue, these are post-Brexit matters that are resolved between the EU and the UK.”

Striking a different tone, Johnson’s spokesperson, Max Blain, told reporters that Paris must stop threatening the UK with sanctions. “It will be for the French to decide whether they want to step away from the threats they’ve made in recent days,” he said.“We would welcome that, if they want to de-escalate the threats they’ve made,” Blain stressed.

France is accusing the UK of violating the post-Brexit trade deal by denying dozens of French boats licenses to continue catching fish in British waters of the English Channel.

Paris threatened to place economic sanctions on UK freights and goods if the dispute is not settled by November 2. The conflict further escalated this week when French authorities seized a British scallop trawler it said was operating without a license off the French northern coast.

In an interview with the Financial Times published Saturday, Macron seemingly downplayed the tensions over fisheries but warned that during the conflict the UK had put its international credibility at stake.

The UK government has denied any wrongdoing and said it would consider launching dispute proceedings to counter possible French sanctions. In a meeting with European Commission President Ursula von der Leyen on Saturday, Johnson said the French threats were “completely unjustified” and “did not appear to be compatible” with the trade deal and wider international law.

The PM said that “the UK has granted 98% of license applications from EU vessels to fish in the UK’s waters and is happy to consider any further evidence for the remaining 2%.”