Macron passed the test for AIDS 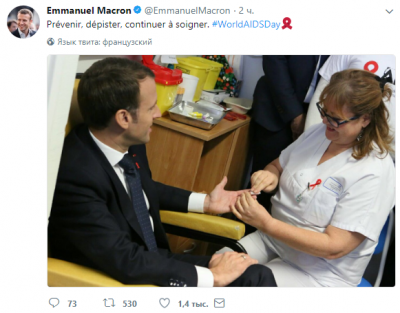 The President of France Emmanuel macron visited the hospital in Saint-Denis, where donated blood for HIV. He said this on his page in the social network.

“To prevent, to detect, to continue treatment,” wrote the Makron in his Twitter, posting a picture of medical office.

As you know, December 1 celebrate the world day of fight against AIDS. HIV (human immunodeficiency virus) is the virus that causes AIDS (acquired immunodeficiency syndrome). HIV, which doctors recently equated with diabetes, can weaken the immune system to a state when the body begin to develop so-called opportunistic diseases that a healthy immune system normally does.

Once in the human body, HIV undermines the immune system by attacking certain cells designed to fight infections, T – lymphocytes or CD4 cells. Over time, HIV destroys so much of these cells that the body cannot defend itself against certain types of cancer, viruses, bacteria, fungi or parasites.

We will remind, recently the two largest trade unions in France held protests across the country against President Emmanuel Macron and his reforms. It is noted that in 170 cities, protesters took to the streets to Express dissatisfaction with the policy Rules. However, the scale of protests is gradually reduced, the newspaper notes.

Recall that the protests in France have been going on for several months. Rallies were held in all major French cities.