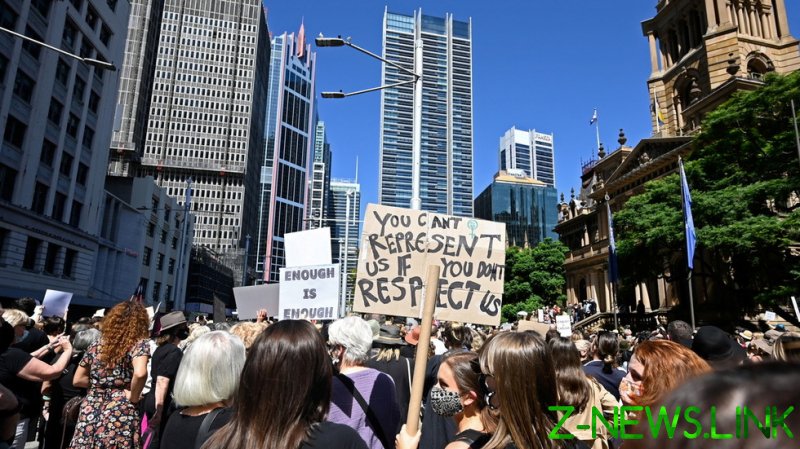 The new jolt rocked Australia’s scandal-ridden political landscape on Monday, after PM Scott Morrison spoke on the massive women’s rights protests. Over the weekend, thousands of women across the country joined the ‘March 4 Justice’ protests against sexual assault, triggered by multiple sex scandals in the country’s government.

Morrison praised the protests and the government’s handling of them, telling Parliament that not shooting at the women marchers has clearly shown that Australia is a “vibrant liberal democracy.”

The PM’s interesting way of praising democracy flopped spectacularly, with the controversial remark immediately coming under fire from various sides of the political spectrum.

Australia’s representative with the UN Committee on the Elimination of Discrimination against Women, Natasha Stott Despoja, said she was “quite stunned” with the PM’s remark and that it was a rather poor way to celebrate democracy.

“That is not the example that is required to celebrate the notions of liberal democracy,” she told Channel Seven on Tuesday.

Some perceived Morrison’s remark as a thinly veiled threat that showed extreme disrespect towards women. Sarah Hanson-Young, a Senator for South Australia, for instance, accused the PM of thinking that “women should be grateful that we weren’t shot for rallying for our own safety and respect.”

“Who is advising him? This is cooked,” she wrote on Twitter.

Other officials, however, stood by Morrison, defending his take on the joys of Australian democracy, and his leadership.

“To be fair to the Prime Minister … he was championing Australia’s democracy, and he was championing the cause of those outside Parliament,” Treasurer Josh Frydenberg stated. “I know people have taken pot shots at him, but the reality is he is providing the leadership that we need.”

Morrison himself reassessed his comments on Tuesday, blaming his unfortunate choice of words on the situation in Myanmar. The South Asian county has been in turmoil for over a month after its military seized power and embarked on a brutal crackdown against anti-coup protests that has already left dozens of civilians killed.