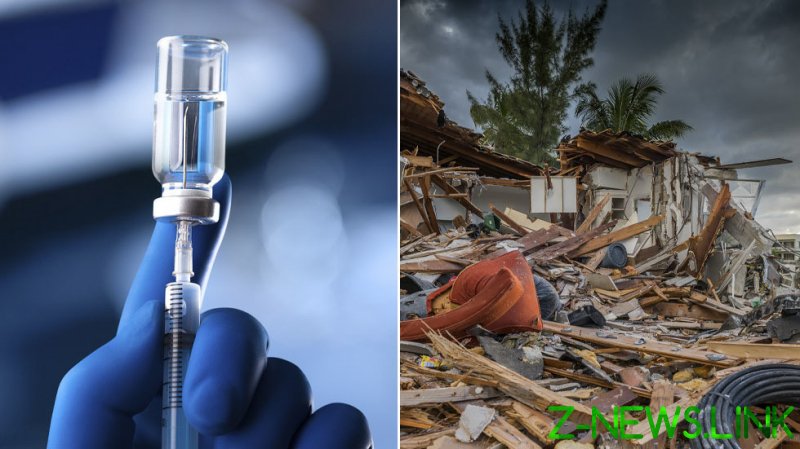 The seemingly odd suggestion was the first to come from FEMA administrator Deanne Criswell’s lips in a recent public service announcement on hurricane preparedness.

“You can take simple steps to prepare for hurricanes, including getting the Covid-19 vaccine,” Criswell told Louisiana residents in the short video posted to the governor’s official Facebook and Twitter pages.

Aside from being vaccinated against hurricanes – er, the novel coronavirus – residents were advised to prepare a “ready kit” of items and documents they might need in case they needed to evacuate, and to engage in the usual prepping rituals. “The best way to keep your family, your pets, and your neighbors safe is to have a plan,” Criswell concludes.

In a statement posted on the governor’s website, Edwards and Criswell said getting the Covid-19 vaccine was “the start of any disaster preparedness plan” this year.

Many on social media were left scratching their heads as to how getting vaccinated would be the first thing a FEMA administrator would mention in a public service announcement about hurricane prep, while a few joked about notion of vaccinating against natural disasters.

Others didn’t think the advice was as strange as it might at first have sounded, with some noting that, if people were forced to evacuate and found themselves in a shelter with hundreds of others, they might prefer to be vaccinated – the point Criswell was probably trying to make in the perhaps too-short clip.

“If you continue having the weather that Louisiana has had these past couple of years, you might end up in a shelter with hundreds of other people who have chosen to not get their shots,” one person wrote.

Edwards has certainly gone all out to inform his state’s residents of the importance of vaccinating, papering the virtual town square with flyers depicting everything from cute dogs to advertisements for hefty lottery payouts.

Early last month, the governor also unveiled a “shot for a shot” campaign, incentivizing residents to get their vaccines by offering a free drink for anyone with proof of vaccination obtained within the previous week. The offer began on June 3 and will last through July.

More controversially, Edwards recently vetoed several Republican bills that he referred to as being “anti-vaccination,” one of which would have banned so-called vaccine passports – a measure popular elsewhere in the region. Other southern states such as Florida and Texas have already outlawed them. The state legislature has the option of reconvening before July 15 in order to attempt to override Bel Edwards’ veto.

Some 3.38 million doses of the Covid-19 vaccine had been administered throughout Louisiana as of July 1, with 35% of the state’s residents having received one shot and 38% having been fully vaccinated.