Home / WORLD / ‘Lot of work to be done’: Lavrov says Russia ready to kickstart dialog on strategic stability, other issues after meeting Blinken

‘Lot of work to be done’: Lavrov says Russia ready to kickstart dialog on strategic stability, other issues after meeting Blinken 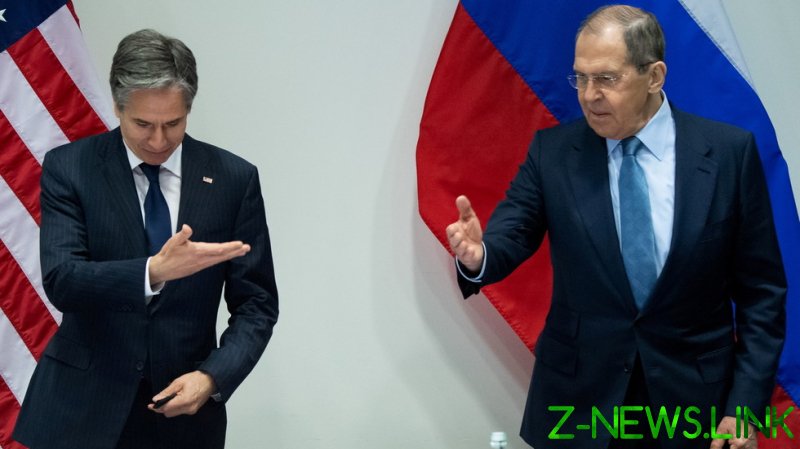 Speaking after his meeting with US Secretary of State Blinken on the sidelines of the Arctic Council meeting in Reykjavik, Iceland on Wednesday, Lavrov struck an optimistic tone, calling the talks “constructive.” The top Russian diplomat said that he saw willingness from the US delegation to mend relations with Moscow that have grown increasingly strained in the recent years, suggesting that the ball is now in Washington’s court.

There’s a lot of work to be done, and it will not be an easy job to deal with it. But I felt from Anthony Blinken and his team the desire to do it. We are ready to do our part

As leading nuclear powers, one of the key problems facing both Russia and the US is their responsibility to ensure “strategic stability,” Lavrov said, adding that Moscow is open for a comprehensive discussion of the issue.

“We have reiterated our readiness to start the dialog and consider all the factors influencing strategic stability, including nuclear and non-nuclear, offensive and defensive [weapons],” Lavrov said.

Noting that experts from both countries will have now to study the proposal to renew the talks, Lavrov said that Blinken appeared to be on board with the idea. “I did not see any rejection of this concept,” the Russian Foreign Minister said.

In his opening remarks, Lavrov switched to English to adress Blinken directly and clarify that, although the US and Russia do not have “exactly similar views,” they both aim for “similar goals.” The Russian official later noted that he and Blinken agreed to continue cooperation on issues where the two countries’ interests overlap, such as nuclear weapons on the Korean peninsula, reviving the Iran nuclear deal, as well as the situation in war-ravaged Afghanistan.

The two officials also discussed the ongoing US-Russian diplomatic crisis, which erupted in December 2016 when the Barack Obama administration expelled a number of Russian diplomats and only intensified under his successor Donald Trump, seeing US diplomatic missions in Russia virtually cease operations.

Lavrov said that “nobody is interested in the chain reaction” that has seen Russia and the US dramatically reduce the size of their diplomatic missions over the years, adding that he believes the American delegation shares the same view.

“I felt a similar attitude from our US colleagues. We will be preparing suggestions for our presidents [to deal with the issue],” Lavrov said.

In a short statement released by the State Department in the wake of the meeting, spokesperson Ned Price also pointed to the areas where Washington and Moscow have common interests, such as finding a long-term solution to the Karabakh conflict. Afghanistan and “curbing Iran and the DPRK’s nuclear programs” were also listed as the matters where US and Russia should pool their efforts.

The statement, however, was highly critical of Russia, and while it claimed that Blinken seeks “a more stable and predictable relationship with Moscow,” it nonetheless included a long list of US grievances and demands against Russia, such as release of American citizens Paul Whelan – convicted of espionage in Russia – and former US Marine Trevor Reed, who was sentenced to 9 years in prison last August for attacking two Russian police officers. The statement also expressed “deep concern” over “Russia’s continued military deployments in and near Ukraine.” Moscow has repeatedly denied that any of its troops are stationed in Ukraine, and sees its recent drills near the Ukrainian border as its sovereign right, including in Crimea, which reunited with Russia following a 2014 referendum.