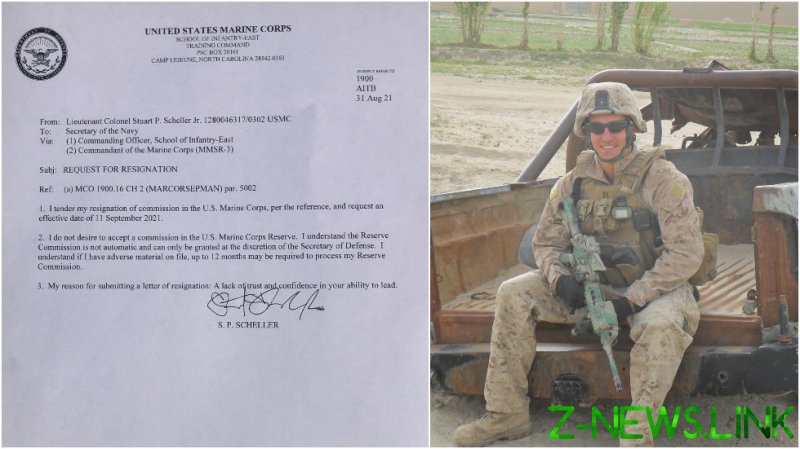 The controversial soldier, Lieutenant Colonel Stuart Scheller, took to his Facebook account on Tuesday to announce his plans to leave the Marine Corps, sharing a photo of his resignation letter, which requests a termination date of September 11. He captioned the post with a message addressed to “the American leadership,” which concludes with what verges on a call for “revolution.”

“We the people submit our resignation with a requested date of 11 September 2021. Reason: Loss of trust and confidence,” Scheller wrote, echoing the wording of his letter.

The Marine first gained recognition last Thursday after posting a Facebook video shredding US military and political leaders for their handling of the withdrawal from Afghanistan, saying nobody had taken responsibility for a string of errors. “I have been fighting for 17 years. I am willing to throw it all away to say to my senior leaders: I demand accountability,” he said in the clip, which quickly went viral across several social media platforms.

Less than 24 hours after the video went live, however, Scheller announced in another Facebook post that he had been relieved of duty “based on a lack of trust and confidence” from his superiors. While he did not criticize their decision, Scheller remained adamant in urging accountability, calling on other Marines to “step up” and join him: “They only have the power because we allow it. What if we all demanded accountability?”

Before formally announcing his resignation, Scheller stirred further controversy with another video – filmed, he says, from “an abandoned school bus in eastern North Carolina” – entitled “Your move.”

“You have no idea what I‘m capable of doing,” he says in the video, in which he also discusses his exposure to toxic burn pits during his deployment in Ramadi, Iraq. He later adds, addressing fellow service members: “Follow me, and we will bring the whole f**king system down.”

The next day, Scheller said he was ordered to undergo a “mental health screening,” suggesting his recent criticisms were being attributed to a post traumatic stress disorder (PTSD).

And for the people who checked on me after my last video… I’m sorry if I scared you.  But know that despite my emotions, my words are always carefully thought out.

Despite tendering his resignation, Scheller has continued his battle with military leadership from his perch on social media, addressing Marine Commandant General David Berger in a confrontational post on Tuesday evening.

“I understand you want to court martial me. Your entire staff has already told me. All the Captains you spoke to today already texted me,” he wrote, adding “Your problem right now… is that I am moving faster than you. I’m out maneuvering you.”