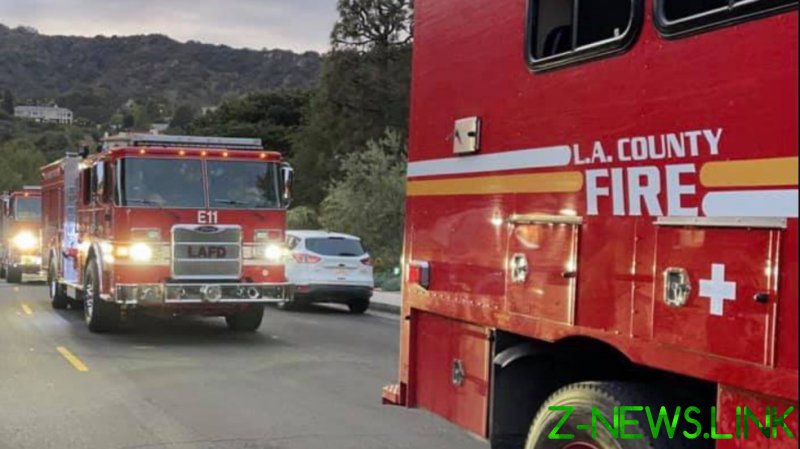 “The shooter was an off-duty firefighter who came to the fire station,” LACFD Chief Daryl Osby told reporters. He shot a 44-year old male colleague, and wounded a 54-year-old fire captain. Osby did not identify any of them by name.

Local media captured the moment the injured captain was airlifted to the hospital.

Police followed the suspect to his home in Acton, a community about 10 miles away – a house designed by a notable area architect and rented out last year.

The shooter “barricaded himself” at the house, Osby said. The home “was set on fire, and he was also found deceased.”

As law enforcement officers surrounded the property and SWAT personnel were airdropped to the location, the home caught fire.

Firefighters could not approach the house over fears for their safety. The property eventually burned down completely. News helicopters spotted a body floating in the indoor lap pool, which is believed to belong to the yet-unnamed suspect.

Lieutenant Brandon Dean, homicide investigator with the sheriff’s department, said the suspect’s body was observed in the ruins of the still-burning house with a gunshot wound to the head that “appears to be self-inflicted,” as no deputies fired their weapons. Dean confirmed that the suspect was identified as a firefighter who worked at Fire Station 81.

The motive of the shooting has yet to be determined, said Dean. Local media have cited unnamed police sources to report the suspect and the victim had got into a dispute.

Agua Dulce and Acton are small communities in Los Angeles county, about 30 miles north of downtown LA, between Santa Clarita and Palmdale.

This is the second fatal incident involving a disgruntled employee in California in the span of a week. Last Wednesday, a former employee of the Valley Transportation Authority (VTA) in San Jose shot and killed 8 former co-workers.