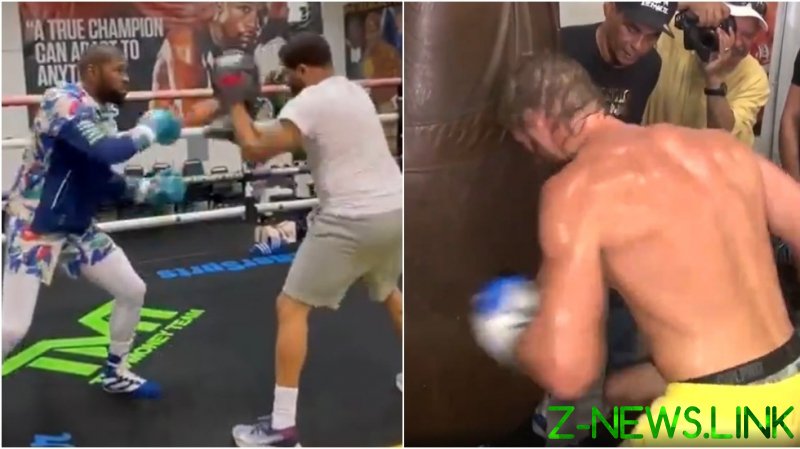 Paul, the novice, winless fighter who has carved out a niche in the professional boxing ranks will move on from fighting fellow YouTubers to taking on arguably the greatest prizefighter in history on Sunday when he meets Mayweather in a fight which will be high on drama and, according to most at least, low on competitiveness.

Social media star Paul, 26, will bring with him to the ring a significant size and reach advantage against the 50-0 boxer but some fans are fearful that any natural benefits that Paul may have against the legendary boxer will be neutralized by the vast gulf in skill which exists between the two men.

And this chasm has been made apparent in the recent training footage which has filtered out from both respective camps, such as at Paul’s open workout in Florida in Wednesday in which he talked the talk, but didn’t quite walk the walk.

Further footage also detailed a comparison between Logan Paul’s languid jab and that of Mayweather’s, which looks and sounds like the 44-year-old fighter is cracking a whip such is the speed and concussive power contained within.

But if fans are expecting a colossal tussle between the two, the rules of the fight released this week may provide a moment of pause. There will be no judges on hand to score the fight which is officially classed an exhibition, and therefore no winner will be declared.

Both fighters will be wearing 10oz gloves in the bout which will take place across eight three-minute rounds.

While many view the contest as little more than a combat curiosity, it has generated some considerable column inches since it was confirmed that Logan Paul had successfully tempted Mayweather back into the ring for the first time since late 2018 – and even more so after Mayweather’s brawl with Logan’s brother Jake at a recent press event to promote the fight.

Jake Paul, who has also tried his hand at professional boxing and will fight former UFC champion Tyron Woodley later this year, provoked Mayweather’s ire when he stole the boxer’s baseball cap during an intense confrontation.

The incident led to a furious Mayweather repeatedly striking the younger Paul and even threatening to “kill” him after he complained of being “disrespected“.

Many people on social media, the landscape in which both Paul’s made their name, don’t exactly think that Logan Paul has much of a chance against the legendary boxer.

“The way he punches with only his arm and how he drops his left when he ‘strikes’ with his right… Lord he’s gonna get hurt,” critiqued one fan.