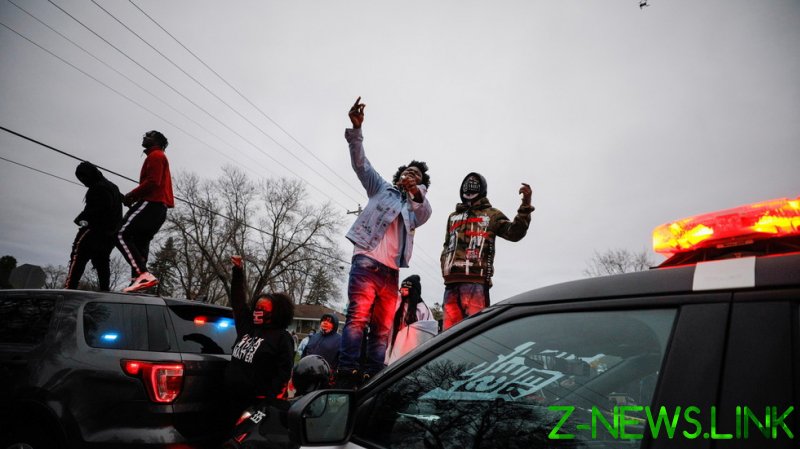 Several hundred people flocked to the Brooklyn Center PD, protesting the death of Daunte Wright, 20, who was shot by police during what appeared to be a routine traffic stop on Sunday afternoon. Wright’s mother told the media at the scene that her son called her as he was being pulled over, and said that it was because of an air freshener dangling from his rearview mirror.

“All he did was have air fresheners in the car and they told him to get out of the car,” Katied Wright said.

It’s illegal for drivers to hang items from the rearview mirror that may obstruct the view of the road.

According to police, the officers who stopped Wright’s car “determined that the driver of the vehicle had an outstanding warrant,” and sought to take him into custody. It’s unclear what transpired next, with police saying that Wright “re-entered the vehicle,” which prompted one of the officers to open fire.

Wright then drove “several blocks before striking another vehicle,” and was pronounced dead at the scene, while a woman in the passenger seat was injured in the crash and was taken to the hospital with non-life threatening injuries.

Daunte’s mother said her son was heading to a car wash when he was pulled over. She also accused police of leaving her son’s body lying at the scene for hours.

Protests against the police’s handling of the incident were initially peaceful, but quickly spiraled into violence. Protesters reportedly hurled rocks at officers and were filmed jumping on police cars and smashing the windows.

Protesters chanted Wright’s name, ignoring the orders of riot police to back off, and faced off with the officers standing guard at police headquarters.

Police used tear gas, rubber bullets, and flash bangs in an attempt to break up the crowd.

As the situation escalated, police declared the gathering unlawful, urging the protesters to disperse.

The protests have been marred by widespread looting. Footage shows looters ransacking a footwear store. They also reportedly broke into a Walmart.

The Bureau of Criminal Apprehension (BCA) has launched an investigation into the incident, with police saying the officers involved in the shooting are believed to have worn body cameras, and that the dash cam was also working.