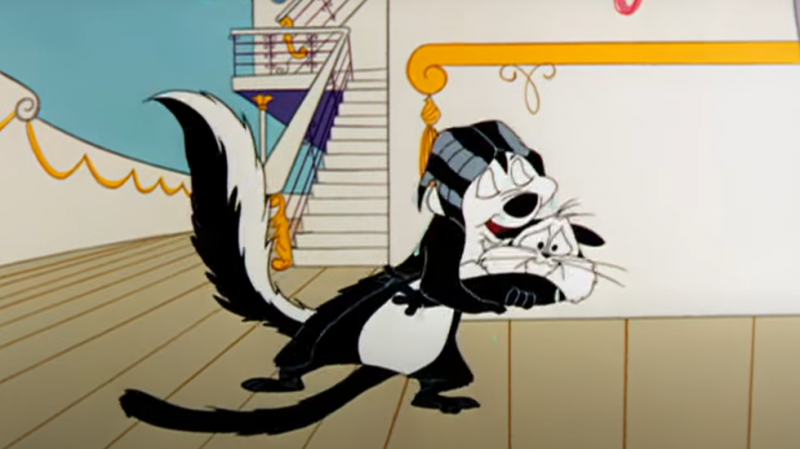 “Right-wing blogs are mad because I said Pepe Le Pew added to rape culture,” Blow wrote Saturday, tweeting a scene from the Warner Bros. classic cartoon series. “Let’s see, he grabs/kisses a girl/stranger repeatedly, without consent and against her will. She struggles mightily to get away from him, but he won’t release her. He locks a door to prevent her from escaping.”

Blow added that Pepe Le Pew “helped teach boys that ‘no’ didn’t really mean no” and that overcoming a woman’s strenuous or even physical resistance was “normal, adorable, funny. They didn’t even give the woman the ability to speak.”

The columnist’s latest anti-Pepe tirade came after conservative commentators, such as Kevin Michael Grace and the Media Research Center, mocked the Times for demonizing Pepe, another cartoon character, following the cancel mob’s assault on Dr. Seuss in recent days. The Media Research Center wrote that Blow was “one-upping the already overdone outrage” over allegedly racist undertones in some Dr. Seuss books.

Blow argued in his column on Wednesday that racism “must be exorcised from culture, including, or maybe especially, from children’s culture.” He cheered on the fact that six Dr. Seuss books were removed from publication.

But Blow didn’t stop there, saying that Pepe Le Pew “normalized rape culture,” and another Looney Tunes character, Speedy Gonzales, had friends who “helped popularize the corrosive stereotype of the drunk and lethargic Mexicans.” He went on to reveal racist themes in such old TV shows as “Tarzan,” “Our Gang” and westerns that depicted Native Americans as “bloodthirsty savages against whom valiant white men were forced to fight.”

Social media users argued that Blow was missing the point on multiple levels. For instance, voice actor Shawn Strickland said, “It’s a cartoon. It’s a funny one. The cat looks like a skunk, and Pepe is confused. The cat refuses every advance. Hilarity ensues.”

Others pointed out that viewers understood Pepe’s actions to be wrong, which is why it was satisfying that he failed to win over the lady cat in every episode. Still others pointed out that fussing over a cartoon character who was created 75 years ago is symptomatic of a corrosive culture: “Imagine having absolutely nothing going on in your life that you sit around and invent things to be mad at.”

Ironically, the Times is stirring the pot on Pepe Le Pew after mainstream media outlets argued this week that right-wing commentators were fixating on “distraction” issues like Dr. Seuss and “The Muppet Show” being canceled for political incorrectness. “Obsessing over lies and non-issues is a way to distract audiences from news that doesn’t fit their political agenda,”Media Matters, the activist group funded by billionaire George Soros, claimed.

Gaming enthusiast Liana Kerzner pointed out the irony that a left-wing pundit is dragging another iconic children’s character into the public square of debate. “Yesterday in left-wing media: ‘The right is arguing about Dr. Seuss instead of real issues,'” Kerzner said. “Today: ‘Pepe Le Pew is rape culture.’ Guys, you can’t have this both ways. Which is it?”

Not surprisingly, this isn’t the first time that Looney Tunes characters have come under attack. Peter Browngardt, executive producer of a new Looney Tunes series, told the New York Times last year that Elmer Fudd and Yosemite Sam would no longer carry guns.