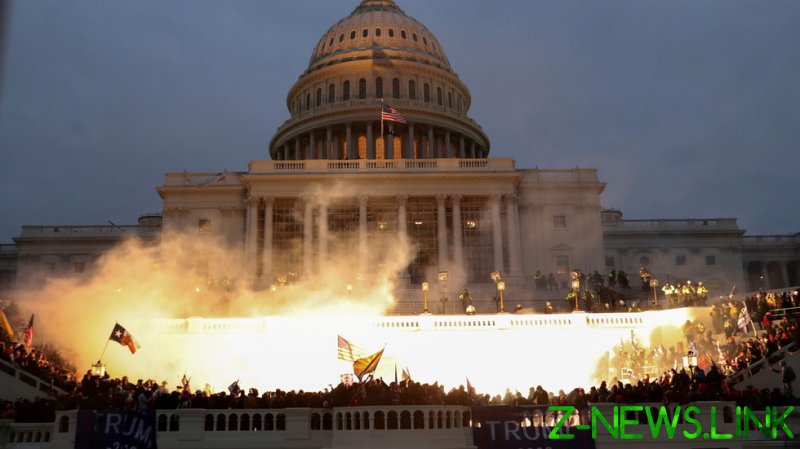 Anna Morgan Lloyd, 49, was sentenced on Wednesday to three years of probation, 120 hours of community service, and $500 restitution to the government, after pleading guilty to a single misdemeanor charge of unlawfully entering the Capitol.

She is the first of some 500 people charged over the January 6 events, which Democrats and the mainstream media have described as an “insurrection.” Hundreds of protesters that gathered to support President Donald Trump had broken into the Capitol and disrupted the joint session of Congress meeting to certify Joe Biden’s disputed election victory.

Lloyd, an Indiana resident, had described January 6 as the “best day ever” in a Facebook post. On Wednesday, she apologized to the court, her family and the American people in general, saying she was “ashamed that it became a savage display of violence that day.”

A registered Democrat who voted for Trump in 2016, Lloyd came to Washington to peacefully support the president, but told the judge she “would have never been there if I had a clue it was going to turn out that way.”

“It was never my intent to be a part of anything that’s so disgraceful to our American people,” she added.

US District Court Judge Royce Lamberth said he was giving Lloyd a “break,” because he viewed the riot as a serious crime that was “intended to and brought a halt to the very functioning of our government.” He was “especially troubled” by some Republican lawmakers who disagreed with the characterization of the riot as an insurrection.

“I don’t know what planet they were on, but there were millions of people in this country that saw what happened on Jan. 6 and that saw what you saw and what you just described: a disgrace to our country,” the judge said.

“I’ve lived a sheltered life and truly haven’t experienced life the way many have,” Lloyd wrote in a statement to the court. “I’ve learned that even though we live in a wonderful country things still need to improve. People of all colors should feel as safe as I do to walk down the street.”

Lloyd’s conversion of sorts appears to have happened under the influence of books and movies assigned to her by her attorney, H. Heather Shaner. Among them were ‘Schindler’s List’, the PBS documentary ‘Slavery By Another Name’, the History Channel’s ‘Burning Tulsa’ and the books ‘Just Mercy’ and ‘Bury My Heart at Wounded Knee’.

Shaner, “regularly” sends books to her clients, according to a recent HuffPost profile. “They’re a captured audience, and it’s life-changing for a lot of them,” she told the outlet. “I think that education is a very powerful tool… So I gave them book lists and shows that they should watch.”

Shaner occasionally teaches at her granddaughter’s school, where she speaks of the US as “the most wonderful country in the world, it’s been great for all kinds of immigrant groups, except for the fact that it was born of genocide of the Native Americans and the enslavement of people.”