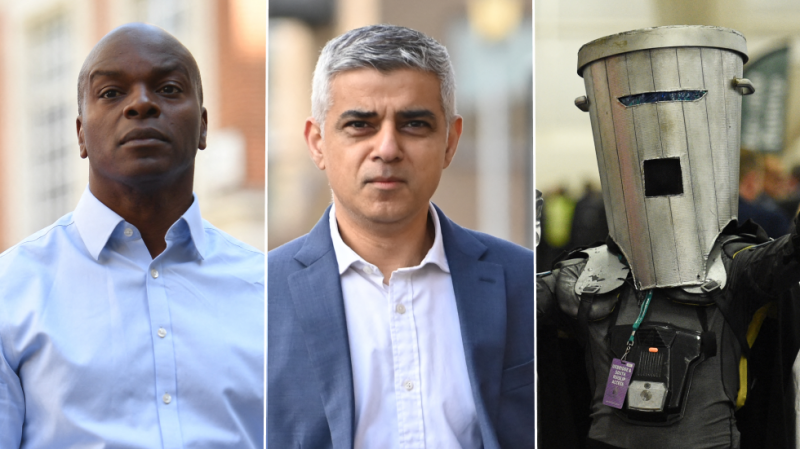 As a democratic exercise, the election campaign, with its parade of prancing, pavonine political poseurs, shames London. As a showcase of the capital’s ‘thought leaders,’ it’s a non-event. I can’t help but feel embarrassed for this great city, consumed as it now is by a prevailing air of mediocrity in British public life.

At a time when slime minister Boris Johnson and his cronies face a torrent of ethical questions, Covid restrictions have cost London an estimated £56 billion in revenue and rising violent crime is blighting communities, far from being a ‘referendum on the government,’ this mayoral election, postponed from 2020 due to the pandemic, has all the relevance of a cancelled mid-season reality TV show – and a D-list line-up to boot.

Down three points but still polling at 48%, incumbent Sadiq Khan, looking to snag the £152k-a-year ‘prize money’ for a second term running, is the clear favourite in a record-breaking field of 20 candidates – significantly up from the dozen who showed out in 2016. But given the calibre of opposition, Khan’s advantage says less about his political nous and more about the parlous state of British political leadership.

Take his nearest rival, Shaun Bailey, for instance. Stuck on 29%, when it comes to big political battles the former security guard and worker turned ethnic Tory poster-boy is a serial loser. Yes, he’s currently plying his trade as an assembly member (AM) at the Greater London Assembly, a post that’s given him ample opportunity since the mid-noughties to take Khan to task on the floor of City Hall. But in the bigger scheme of things, being an AM is no great shakes. I’ve known PTA members with more political influence, which is inexcusable, given how long Bailey has been on the scene.

In the 2010 general election, Bailey lost the newly created Hammersmith seat to Labour by 3,549 votes. In the run-up to the 2015 general election, he failed to be chosen as the Tories’ prospective parliamentary candidate for Kensington, Croydon South and the Uxbridge South and Ruislip seats. By this point, you’d think he’d get the hint. But Bailey is, if anything, a trier. Rolling the dice once again, at the 2017 general election he contested the Lewisham West and Penge… and came second, with 12,249 votes. The Labour candidate won, with 35,411.

I’ve studied Bailey from afar for some years. At one time, I thought he had potential, despite some dubious views. In 2007, I interviewed the then 35-year-old for a piece on black conservatives for the New Statesman. “It’s not like they’ve [the Conservative Party] said we need to get 13.5 per cent of the party black, unlike the new Labour caucus that says they need a quota,” he had told me. “The Tories adopt the talent; new Labour’s quota is just for the wedding photo.”

Two years later, he cropped up again, this time in my ‘seminal’ political travelogue, True Blue: Strange Tales from a Tory Nation, which I co-authored with journalist Chris Horrie. As Bailey had me made from our previous encounter, it was agreed that Chris should go to a Tory shindig in Hammersmith we’d been invited to, to sketch Bailey and his wing man, Ray Lewis, the disgraced former deputy to the then recently elected mayor for London, none other than Boris Johnson.

Reviewing True Blue for the Guardian, Esther Addley wrote of the gathering,“Lewis joked about a conversation about the local Conservative candidate, Shaun Bailey, who was also present and, like Lewis, is black. ‘I’ve just been speaking to a lady and she asked: “Which one is Shaun and which one is Ray – it’s hard to tell you apart.”’” Oh, how we laughed.

Such is the Tories’ brand of negritude it has led the Left, predictably, to write off Bailey with the usual smears and jibes. Former Labour MP for Kensington Emma Dent Coad once called him a “token ghetto boy” suggesting he was a patsy for public school boys like David Cameron and Johnson who wanted to detoxify what Theresa May had infamously called “the nasty party.” Hitting back at this “racist” and “hate-filled” slur, Bailey forced Dent Coad into a humiliating apology, which gave him and the Tories some rare air on the moral high ground of race.

Nonetheless, Bailey can’t escape being the only black guy in the Tory room, even if, to rank and file party members, Johnson’s wider cabinet looks like a float at the Notting Hill Carnival, such is its ethnic diversity.

As a party-political atheist, I almost feel sorry for him. He’s a true ‘believer’. As he told me, in a proto-Candace Owens moment, “People are shocked at my conservative views. But left-wing politics equals welfare politics.” Such a view would be all well and good if there was some actual backbone to it. But Bailey’s problem is, like much of the mayoral field, he’s a lightweight who relies on patronage and patriarchy rather than the will of the electorate. But for all his ‘working-class lad made good’ schtick, what has he got to show for it? Other prospects with fitter faces would’ve bagged a safe seat by now. Shaun Bailey is no David Lammy. If he didn’t exist, you wouldn’t want to invent him.

Last year, he exemplified his problem and the wider desultory nature of mainstream London politics after he released a universally mocked campaign video entitled “The Great London Bake Off”. A parody of the popular baking show, which starred Bailey, two amdram actors and a badly green screen’d Sadiq Khan, the spot was hilarious – for all the wrong reasons.

“I can really taste the high crime coming through,” coos a fake Prue Leith in the clip as she rubbishes Khan’s hopeless chocolate ‘London cake’ to a grinning Bailey. As a campaign concept, it’s awful. In fact, it’s so bad one wonders who is advising Bailey. In fairness to him, the same can be said of most of the other candidates. Nigh on three-quarters of the field are a shambles – a complete waste of time, votes and Londoners’ energy. As American broadcaster ABC News put it, “the field of candidates from outside Britain’s mainstream political parties looks increasingly bizarre.”

Ms Reid, for instance, is the first black leader of any political party in the UK, and campaigning for politicians across the board to “treat violence against women and girls as a political and policing priority.” But is anyone listening? Not if the MSM has its way. Ditto Porritt’s lament that one of the reasons she started cycling more “was to avoid [sexual] harassment on public transport” or Berry’s policy pitch to introduce a £14-an-hour living wage and pilot a universal basic income for Londoners. They’ve been lost in the fog of a politics that’s not just showbusiness for ugly people but increasingly no business for women who aren’t prepared to be media-friendly ‘characters.’

Just as the MSM manufactured Nigel Farage’s success, and that of other far-right candidates such as the English Defence League’s Tommy Robinson and the British National Party’s Nick Griffin before him, it now has a jones for Laurence Fox’s bizarre, pseudo-macho reactionary schtick, despite him polling a derisory one percent in the polls. Meanwhile, Porritt and Berry, who are polling around eight and six points respectively, seem to be the victims of an ‘ironic’ election landscape that favours silly men in silly costumes with the silliest of opinions.

Cue: muscle tee-wearing Bailey. Having publicly yearned for a return to a time when male teachers “were men” and suggested that ending domestic violence “starts with girls”, as someone with ambitions to “lead” a city in which at least four million citizens are female, his comments and scribblings for London’s Evening Standard and the right-wing Centre for Policy Studies leave much to be desired.

At £10,000, the buy-in for a seat at the London mayoral poker table ain’t cheap; and if you don’t secure five percent of valid first preference votes cast you lose your dough. This, of course, weeds out most chaff. But even the Lib Dems lost their deposit in 2012. Nevertheless, £10k is small beer if, like Gen Z YouTuber Omilana, you’ve 3.27 million subscribers on your channel and another million followers on Instagram, as the advertising and sponsorship revenue generated by guerrilla-style campaign exposure covers the costs. Similarly, if you’re a right-wing grifter with an ‘anti’-something or other agenda to push for moneymen further up the food chain, a self-aggrandising mayoral election campaign is good bang for your buck.

Thanks to an uninspiring field, a sleazy government and the pandemic’s damaging effects on millions of beleaguered Londoners, regardless of who wins the election, victory will be Pyrrhic. Sadiq Khan may well be back in his comfy chair at the GLA come Friday morning, but with the smart money on a turnout significantly down on 2016’s 45.3 percent, he’ll be praying at least 40-something percent show up.  Anything less and it won’t just be this risible election that goes down in history as a joke.