London police hassle old woman for feeding birds, tell her to ‘DISPERSE’ because of Covid-19 restrictions 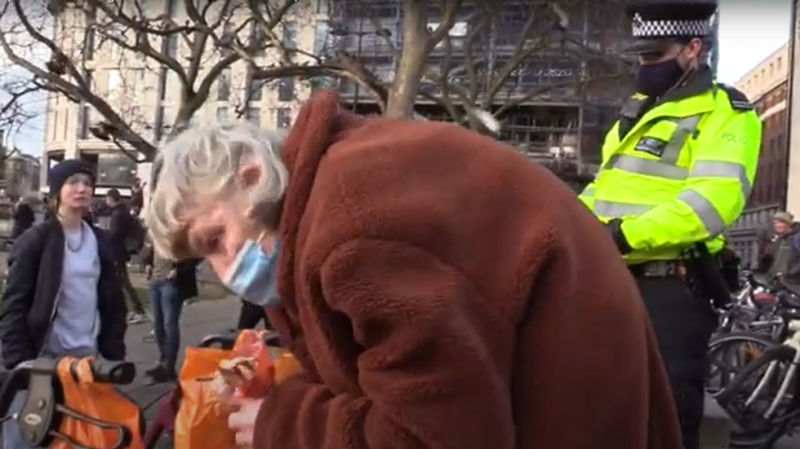 The video, which was posted on YouTube late Sunday, shows an old woman with a pushcart feeding the birds near London’s Marble Arch. Two police stand near the woman and her grey-bearded male companion, and one of the officers urges them to leave the area voluntarily because of restrictions on gathering.

“Feeding the birds, and getting hassled,” says an onlooker filming the encounter from behind the woman. “Seriously, do the birds have Covid as well?” another voice asks.

As the officer lectures the couple, the second onlooker adds, “The birds are gathering, what would they do?”

Once the couple agree to leave, they ask if they can go in the direction blocked by the officers. “Yes, it’s a free country,” one of the police replies. Another onlooker says, “Get out the way, then” as the old woman and her companion walk away.

Social media users were disgusted by the incident as the latest example of government overreach in coronavirus mitigation practices.

“What do you want to do when you grow up?” musician Gareth Icke asked on Twitter. “I want to stop elderly women from feeding birds.”

Several observers lamented that the woman probably had few pleasures left in life, other than feeding the birds, but “tyrants” took away even that. “Most probably feeding the birds is the highlight of her day,” Woolstanwood Parish Councillor Brian Silvester tweeted.

London is among areas of the UK that are currently under Tier 4 lockdown rules because of the rising number of Covid-19 cases. Concerns over the pandemic escalated in recent weeks as a faster-spreading strain of the virus emerged. UK Prime Minister Boris Johnson said Sunday that he’s considering even tougher measures to blunt Covid-19’s spread. The Labour Party has called for a nationwide lockdown.

Another video posted on Sunday shows dozens of police marching together at Hyde Park before splitting up into teams to patrol the area for Covid-19 violators. Police can be seen confronting people walking together at the park and demanding proof that they were from the same household.