Lomachenko will fight for the WBC title from Briton Campbell 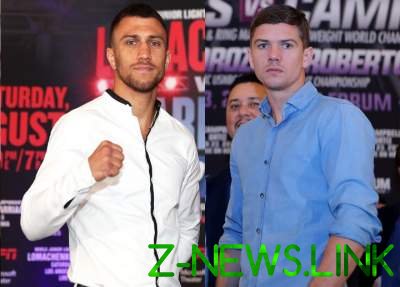 Vasyl Lomachenko (13-1, 10 KO’s) may be another step closer to the status of absolute world champion.

World Boxing Council (WBC) at the official level confirmed the holding of the fight for the vacant title in the lightweight division between Vasyl Lomachenko and Luke Campbell (20-2, 16 KO’s).

The previous owner belt American Mikey Garcia voluntarily gave up the title and received the status of Emeritus champion.

See also:  Juventus for the third time in a row won the Cup of Italy

Date and place of the battle of two Olympic Champions still unknown. Lomachenko his next fight plans to hold in September this year.

The WBC also announced the organization of a mini-tournament, the winner of which will receive the status of mandatory Challenger for the title, Lomachenko or Campbell.

In the semi-finals of the qualifying tournament Zaur Abdullayev will meet with Devin Haney — and Teofilo Lopez will fight with Javier Fortuna.

Vasyl Lomachenko last went to the ring in mid – April in Los Angeles the Ukrainian in the fourth round knockout over Anthony crolla and defended the titles of the WBA and WBO lightweight.