Home / WORLD / Lockdowns or the planet gets it? Guardian ‘accidentally’ suggests Covid-like shutdowns every 2 years to meet Paris climate goals 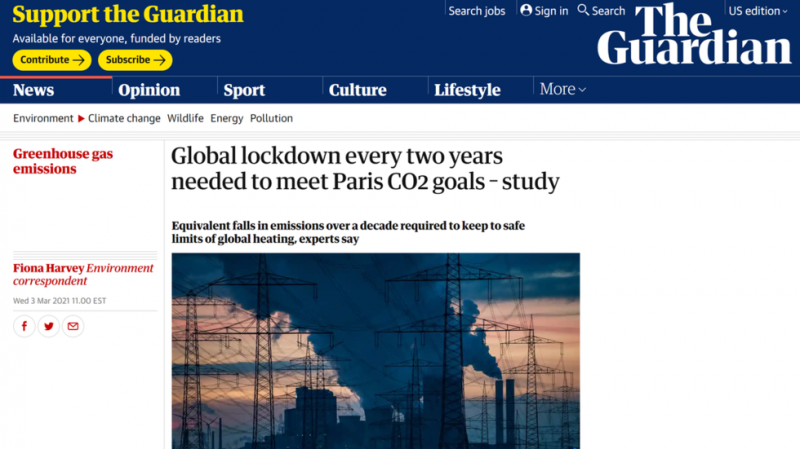 If carbon dioxide emissions don’t drop by the equivalent of a worldwide lockdown “roughly every two years” for the next decade, the earth will heat to apocalyptic levels, a team of researchers at the University of East Anglia warned in a Nature article published Wednesday.

Despite calling for “completely different methods” to achieve and lock in the emissions drop from the pandemic, lead researcher Corinne Le Quéré nevertheless insisted that climate change couldn’t be a “side issue. It can’t be about one law or policy, it has to be put at the heart of all policy.”

…others at first assumed it had to be satire, because no one would post something that on-the-nose –

…except maybe for the World Economic Forum, which actually posted in praise of what lockdowns had done to cities – presumably turned them into uninhabitable hives of snitches where one can’t even take in a Broadway show anymore – earlier this week, before removing its tweet under public pressure.

The WEF had posted a video praising the “silence” and clearer air – and lack of humans, though they didn’t say that part out loud.