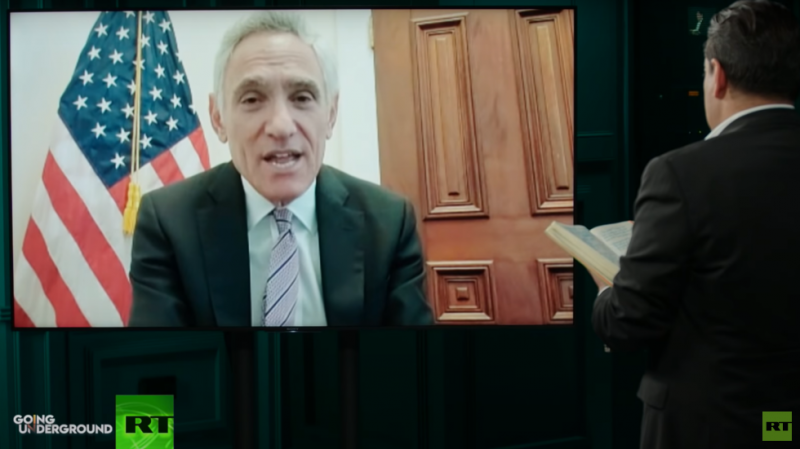 On Saturday, the Stanford University doctor, who has emerged as President Donald Trump’s top adviser on responses to the Covid-19 pandemic, called the lockdown policies an “epic failure” and argued they are “killing people,” while speaking with Afshin Rattansi on RT’s Going Underground show.

The controversy was so fierce that Atlas was forced to apologize. “I recently did an interview with RT and was unaware they are a registered foreign agent,” he said Sunday on Twitter, adding that he now “regrets” doing the interview and also apologizing “to the national-security community who is working hard to defend us.”

No explanation was offered for how voicing opinions on a Russian-funded television outlet might jeopardize US national security. None was needed.

Democrats and mainstream media outlets have repeatedly squashed discussion of undesirable information or viewpoints, by alleging a nefarious Russian plot behind the report. Such tactics were used, for example, to dismiss damning information about the Hillary Clinton campaign – released by WikiLeaks in 2016 – and recent revelations about alleged influence-peddling by Democratic presidential candidate Joe Biden’s family.

Media critic Mark Dice pointed out that no objections were raised when US Representative Adam Schiff (D-California) and other Democrats appeared on RT in the past.

The Grayzone editor Max Blumenthal tweeted he was “surprised it took this long for the US center-right opposition to merge Covid panic with Russia hysteria.”

MSNBC host Matt Negrin may have revealed just a hint of anti-Trump media vitriol when he responded to Atlas’ apology by saying, “Are you the dumbest motherf***er in the f***ing world?”

It would be hard to assume that Atlas was caught off guard by the fierceness of the attacks, however, given his experience as a Trump adviser.

Atlas told RT he wrote about the issues discussed in the interview back in April or May, long before he joined the White House Coronavirus Task Force.

“I wasn’t the villain of the world when I wrote it, but when you come up and you stand next to the president of the United States – in an attempt to help the country in the biggest crisis in the world – you must be destroyed by the media in the United States. And so it’s a sad statement on America that the US is hysterical over this.”