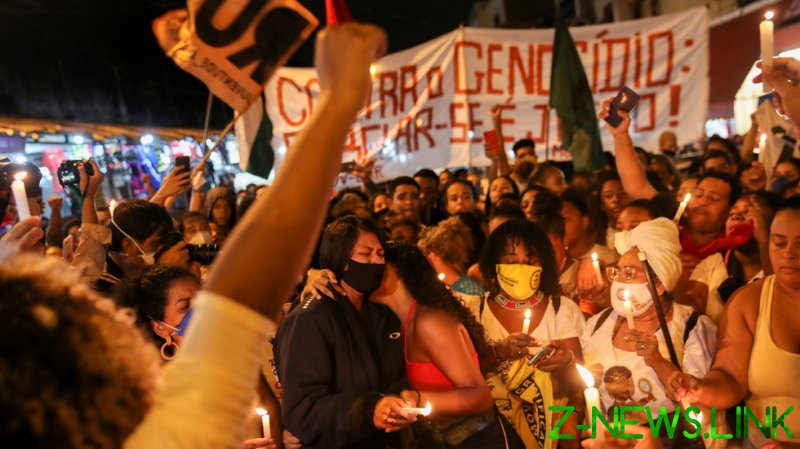 Rio’s Civil Police chief Allan Turnowski told reporters that the dead were drug dealers who “fired at the officers – to kill.”

It was initially reported that Thursday’s police raid on the Jacarezinho community left 25 dead, including a drug unit officer who was shot in the head. It was immediately clear that the operation was the deadliest police action in the city’s history and the second-deadliest in the state of Rio de Janeiro in 16 years. Slums like Jacarezinho, also known as favelas, are plagued by rampant crime and poverty.

The raid sparked outrage among opposition politicians, celebrities and locals on social media, with many describing it as a massacre and a slaughter. Popular Brazilian singer Anitta tweeted that police “invaded houses, spreading terror in one of [Rio’s] largest favelas.”

Locals told the media that police killed an unarmed and wounded suspect who tried to hide in another resident’s home. They posted photos of a bloodstained apartment floor, a bloodied plastic chair lying on the street and puddles of blood on the pavement.

Felipe Curi, the head of Rio’s specialized police (DGPE), denied that executions were carried out. He told reporters that those killed were “criminals, murderers and drug traffickers” who themselves had attempted to kill the officers, and “there was no other alternative.”

The residents of Jacarezinho and other favelas marched in protest on Friday, demanding justice for the victims.

The UN and human rights groups, including Amnesty International and Human Rights Watch, called for an investigation into possible extrajudicial killings by police.

The raid was carried out after Brazil’s Supreme Court restricted police actions in favelas to “absolutely exceptional cases” due to the Covid-19 pandemic.

The Brazilian edition of the Spanish newspaper El Pais reported that at least 13 victims were not on the police list of 21 people suspected of recruiting minors into drug trafficking, which had led to the operation in the first place. That number may grow higher because the Brazilian Bar Association did not identify all of the victims, the paper said.

The police denied any misconduct, and pro-government politicians have backed the operation. Brazilian Vice President Hamilton Mourao said the civilians killed were “all bandits,” and authorities will have to solve the problem of drug trafficking in favelas “one day or another.”