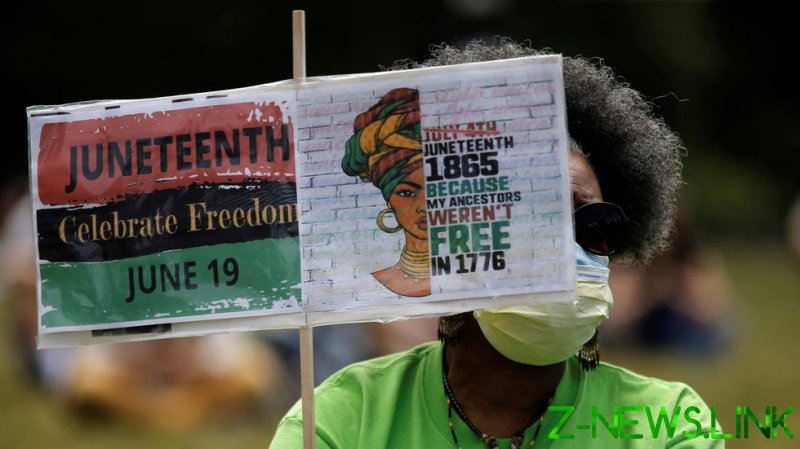 Lawmakers voted 415-14 to pass the bill on Wednesday, making the 19th of June “Juneteenth National Independence Day,” the twelfth federal holiday and the first created since Martin Luther King Day was established in 1983. While President Joe Biden has given no indication he would veto the measure, it still needs his signature before it becomes law.

The holiday marks the day when the last slaves in the American south learned of their freedom following the Civil War. While the conflict ended in April 1865, the news didn’t reach the last slaves until months later, when Union troops publicized the Emancipation Proclamation to residents of Galveston, Texas.

All 14 ‘no’ votes against the bill came from Republicans, some of whom, such as Montana Rep. Matt Rosendale, said the law was merely a celebration of “identity politics.”

“Since I believe in treating everyone equally, regardless of race, and that we should be focused on what unites us rather than our differences, I will vote no,” he said in a press release, adding that the bill is “an effort by the Left to create a day out of whole cloth to celebrate identity politics as part of its large effort to make Critical Race Theory the reigning ideology of our country.”

Arizona Rep. Andy Biggs argued that Democrats had “weaponized” the bill, though appeared to largely take issue with the formal name it was given, singling out the use of the term “independence” over “emancipation.”

Though most states have officially recognized Juneteenth in one way or another – with Texas becoming the first to do so in 1980, followed by 46 others in the years since – on the federal level, the holiday has only received a nod from the Senate, which passed a resolution in 2018 to honor “the day on which slavery legally came to an end.”

New York is among the latest states to mark the holiday, with Governor Andrew Cuomo signing a bill to do so last year, while Washington state upgraded Juneteenth to a paid state holiday for public employees just last month.