Home / WORLD / ‘Living in parallel universe’: Australian PM boasts of Aussies’ love of freedom to the UN as police crackdown continues at home

‘Living in parallel universe’: Australian PM boasts of Aussies’ love of freedom to the UN as police crackdown continues at home 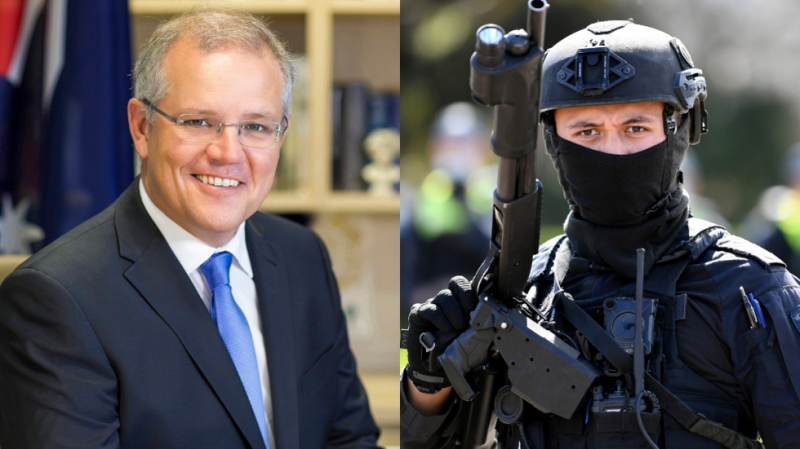 In a virtual address to the UN General Assembly on Friday, Morrison talked up Australia’s belief in “a world order that favours freedom,” in “respecting the rights and freedoms of the individual” and “in the inherent dignity of all people…no matter the circumstances.”

Morrison had barely spoken before Australian libertarian activist Randall Evans put together a video showcasing the Aussie PM’s lofty words alongside footage of ordinary Australians being brutalized by police for breaching the country’s draconian coronavirus restrictions.

Visuals of a young woman choked out by a police officer for not wearing a face mask, or the couple wrestled to the ground by cops for going unmasked on a beach didn’t seem to align too well with the politician’s message to the world.

Cops were seen tackling and choking non-compliers, shooting protesters with rubber bullets, and pepper-spraying an elderly woman in the face. Most, if not all of the videos were shot in Melbourne, in the state of Victoria.

Commenters online ridiculed Morrison. “The Prime Minister must live in a parallel universe,” former Australian Senator tweeted, while another commenter joked that Morrison should have called on the UN to “restore human rights in Australia.”

Some of the world’s harshest lockdown restrictions have been applied in Australia, with the city of Melbourne set to become the world’s most locked down city early next month after authorities extended a stay-at-home order there during the week. By the time the restrictions are eased on October 26, the city will have spent nearly nine months on full lockdown.

Stay-at-home orders remain in place in Sydney too and throughout much of the state of New South Wales, and across the country, most incoming travelers have to spend two weeks in government-run quarantine camps.

While Morrison has not made Covid-19 vaccination mandatory, he has allowed private companies to require their employees to get the jab, and individual states have crafted their own jab policies. In Victoria, Premier Dan Andrews has promised to “lock out” the unvaccinated from the economy, while New South Wales has made the shot mandatory for public sector workers… with the exception of politicians.