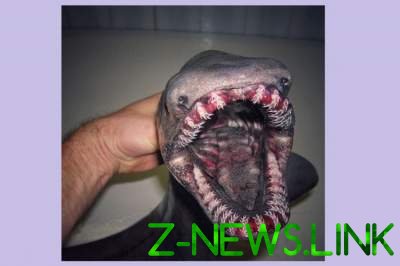 Creepy animal was discovered off the coast of Portugal.

The frilled shark was caught back in August at a depth of 700 meters.

According to scientists, this species has a long, thin body, moves like a snake shark.

The frilled shark is a species of cartilaginous fish of the genus frilled sharks of the same family. It looks more like a sea snake or eel than other sharks. Inhabits the Atlantic and Pacific oceans. Due to the presence of primitive features, the frilled shark is called a “living fossil”.