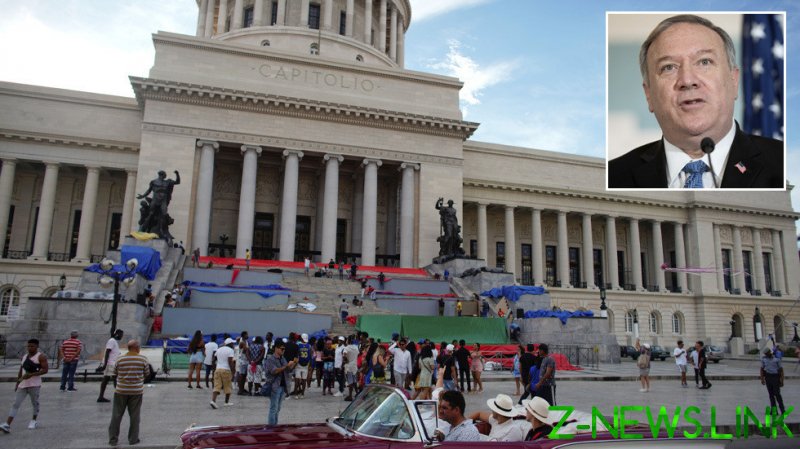 According to a report from the New York Times, Mike Pompeo is considering placing Cuba on the US’ ‘State Sponsors of Terrorism’ list before he leaves office, with only 22 days left until the Joe Biden administration takes control in January.

This would brand Cuba as an instigator of terrorism and subsequently place curbs on US aid, financial transactions and other forms of support to the country. If implemented, Havana would join Iran, North Korea and Syria on the naughty step, with Sudan having been removed several weeks ago for brokering a deal with Israel.

In reality, the list is more frequently understood to be, very simply, a collection of countries which the US really doesn’t like, rather than a definitive measure of what constitutes true “terrorism.” The inclusion of nations such as North Korea and Cuba makes no sense under that specific angle.

But utilizing such a designation to stigmatize and isolate such countries is a very useful device for a fanatical secretary of state like Pompeo. With President Trump’s administration having pursued a ‘Neo-Monroe Doctrine’ against unfavourable states in Latin America, the administration is seeking to cement its hawkish legacy and block Biden’s path to warming ties with Havana, having already done so as part of the Barack Obama administration.

The broader foreign policy impetus of the Trump White House has been, under the auspices of ‘Make America Great Again’, to reaffirm US hegemony over the world by brute force, taking an extremely uncompromising position towards enemy states, and in turn deliberately rolling back Obama’s foreign policy, which saw Washington make peace with numerous countries.

While the Iran deal was torn up, the Trump administration also went on the offensive in Latin America in the pursuit of an age-old tradition of looking to remove governments opposed to the US.

The chief architects of this ‘Neo-Monroe Doctrine’ were Pompeo and former National Security Advisor John Bolton. There was an attempt at outright regime change in Venezuela, a coup effort in Bolivia against Evo Morales, closer ties with Brazil under Jair Bolsonaro and a broader effort to attempt to isolate Cuba that involved imposing new sanctions, which saw the binning of Obama’s policy of reconciliation.

Not surprisingly, Pompeo has been particularly bullish on the issue. In April, when Cuba sent its doctors to help multiple countries combat the pandemic, he accused it of exploiting the situation.

Of course, the administration is now at the end of its tenure. The attempt to depose Nicolás Maduro in Venezuela has not succeeded, nor has US pressure particularly got to Cuba, with the island attracting nearly $2 billion in foreign investment despite sanctions.

So that begs the question: what next? As we have seen with China, Iran and other issues, the current administration is concerned that Biden will simply torpedo Trump’s legacy.

As Pompeo’s dogmatic views allude to, the Cuba issue in particular is motivated more by ideology than specific strategic urgency, unlike in the Cold War era – especially given the influence of the Cuban exile anti-communist lobby within the Republican Party.

The presence of a communist state on Florida’s doorstep has always been a huge irritant to the US, but is it going to be a strategic priority for Biden to keep up the heat?

The answer is almost certainly not: his immediate priorities will be China, pandemic response and economic recovery. As a result, Pompeo is aiming to preserve his hyper-aggressive legacy by throwing a spanner in the works on his way out. And that is how we arrive at the notorious ‘State Sponsors of Terrorism’ list.

Clearly Cuba does not sponsor terrorism. But it does offer military support to Maduro’s Venezuela, and under America’s completely unbiased definition, that’s enough to warrant the designation (while, of course, many countries who do legitimately fund terrorism stay off the list).

But the point isn’t about cracking down on terrorism, or even the sanctions impact it brings; it’s the symbolism of depicting Cuba as a malign rogue actor undermining the interests of the US – and throwing a wave of bureaucratic hurdles in the way of the Biden administration via state department reviews if it wishes to remove the designation.

Thus, as with the recent spate of sanctions against China, the move is designed to try and lockstep Biden into this legacy policy. Ultimately it is a last throw of the dice by Pompeo, who is likely to be remembered for a string of callous decisions and has frequently been described as “the worst secretary of state in history.”

Having acted more as an ideologue and a zealot rather than a diplomat, his grievances against Cuba simply represent an extension of that egregious mission. But ultimately, he will leave office empty handed. Cuba has learned to survive for over 60 years without the US doing it any favours, and it isn’t going to be brought to its knees now.