Home / WORLD / LISTEN to the sound of protest: pianist turns tense standoff between eco-activists & police in Germany into concert

LISTEN to the sound of protest: pianist turns tense standoff between eco-activists & police in Germany into concert 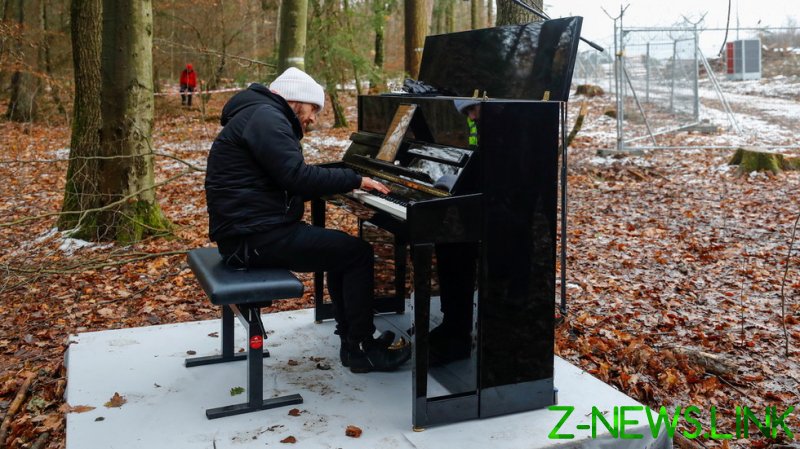 The German-Russian musician, who was awarded Germany’s Order of Merit in October — the nation’s only federal decoration, performed live on Friday right in the middle of a 300-year-old forest on the edge of a clearing created by construction workers for the extension of a local highway.

Just meters away from the barbed wire separating the forest from the clearing zone filled with construction equipment and police cars, the pianist played several pieces ranging from “Danny Boy”, an Irish folk song, to the works of American jazz pianist and composer, Fred Hersch.

“This forest is a symbol of so much that has to change,” Levit wrote on Twitter, adding that it was a “sad pleasure” to play there. His performance comes at a time when the clearing works were about to end.

Out of 1,000 hectares occupied by the Dannenroeder Forest, 27 were reserved for construction and most of them have already been cleared despite stubborn resistance by protesters, who occupied the wood more than a year ago.

With his “musical statement,” Levit wanted to back the eco-activists who had opposed the forest clearing for more than a year.

The pianist also expressed his gratitude to the protesters and voiced support for their fight by saying they “breathed new life” into the cause. The performance came at the invitation of the German branches of Greenpeace and Fridays for Future movement.

“Instead of cutting up healthy forests in order to cement yesterday’s transport policy, we need an immediate halt to the expansion of all planned motorways. Traffic planning must be reassessed under climate protection aspects,” Greenpeace spokeswoman, Gesche Juergens, said in a statement announcing the concert.

Through 18 loudspeakers, Levit’s music was broadcast to the last remaining tree houses – all that was left of a squatter settlement created by the activists in the forest.The Dannenroeder Forest has been the scene of a tense standoff between eco-activists and the police as authorities sought to clear the area before construction work started.

Attempts to evict the squatters often spilled into violent confrontation that led to casualties on both sides. 40 officers were injured, police spokesman, Jochen Wegmann, told local media this week. He added that the squatters pelted police with bottles, stones and pyrotechnics and even steel balls.

“This violence is terrifying and ruthless. These protesters want to save trees, but endanger people,” he said. Some local media reports suggested protesters suffered injuries as well. On Saturday, police used water cannon against the activists as they rebuilt barricades and blocked an emergency road used by construction workers. The activists decried the use of water cannon in freezing temperatures as “irresponsible.”

The extension of the A49 highway is expected to link the cities of Kassel and Giessen and has been a source of tension between authorities, local residents and eco-activists for quite some time. A previous project was rejected due to nature conservation concerns.

Opponents of the current plan argue that it is no better since it involves clearing a total of 85 hectares of land, including what is in Dannenroeder Forest and nearby woods and could do “irreparable” harm to the local environment.