‘Like dog eating own vomit’: Top Victoria cop erupts in anger as he repeats warning against joining Melbourne anti-lockdown rally 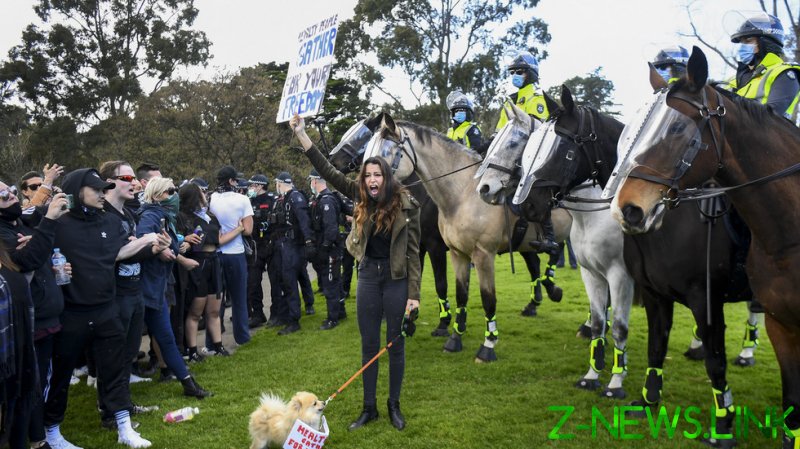 “As I’ve previously said, as was repeatedly said, it is at the moment unlawful to leave home to engage in protest activity,” Victoria Police Assistant Commissioner Luke Cornelius told the media earlier on Friday – one day ahead of a demonstration against Melbourne’s strict Covid-19 lockdown rules.

Hundreds of defiant residents reportedly declared they will attend the ‘freedom walk’ at the Royal Botanic Gardens’ Tan track this Saturday, subscribing to a now-deleted Facebook page.

Responding to this, Cornelius said those attending will be met by a heavy police presence, and anyone charged with breaking the quarantine laws faces a fine of up to $1,652.

Having to repeat the stay-at-home warning was incredibly frustrating, the high-ranking officer said.

To be honest, I feel a bit like a dog returning to eat his own vomit.

“And if people were less selfish and a bit more grown up, we wouldn’t have to keep doing this,” he added. Cornelius made some headline-grabbing remarks last month when he described the “bats**t crazy” anti-lockdown protesters as members of the “tin foil hat brigade.”

The long-serving officer also drew the ire of people online when he defended the arrest of an expecting mother weeks earlier, who was charged with inciting a protest through Facebook. Footage of the pregnant woman being handcuffed went viral in Australia, but Cornelius said he was “satisfied” with his subordinates’ conduct – though he admitted the optics of the arrest were not good at all.

Meanwhile, Victoria police have targeted some of the alleged protest leaders ahead of the Saturday event. Earlier on Friday, officers came after Tony Pecora, one of the most vocal lockdown dodgers in the city. The man, who was already on bail for violating the quarantine rules last month, has been granted a second conditional release but was banned from using social media and reaching out to other organizers.

Last week, James Bartolo, a former soldier and a self-described “freedom fighter” who runs a Covid-19 conspiracy network, was violently arrested in his own home on suspicion of encouraging people to rise up against the lockdown. He was charged with “incitement, possession of prohibited weapons and two counts of resisting police,” but was released on bail shortly afterwards. He will have to stand trial in May.

The Melbourne metropolitan area is under stage 4 lockdown, which has recently been extended until September 28. The lockdown limits people’s mobility and imposes curbs on outside activities, with people obliged to shop for food and essentials within 5km distance from their home, except if the nearest supermarket is farther than that; only one person per household is allowed to go shopping at a time.

Melbourne and Victoria state have been an epicenter of the Covid-19 outbreak, accounting for the bulk of Australia’s 788 deaths. Most of the country’s confirmed cases, which account for over 26,000, have also been recorded in the city and the surrounding region.