Home / WORLD / ‘Like a wet fish’: UFC fighter Hill refuses to tap despite having arm DISLOCATED by rival Craig (VIDEO)

‘Like a wet fish’: UFC fighter Hill refuses to tap despite having arm DISLOCATED by rival Craig (VIDEO) 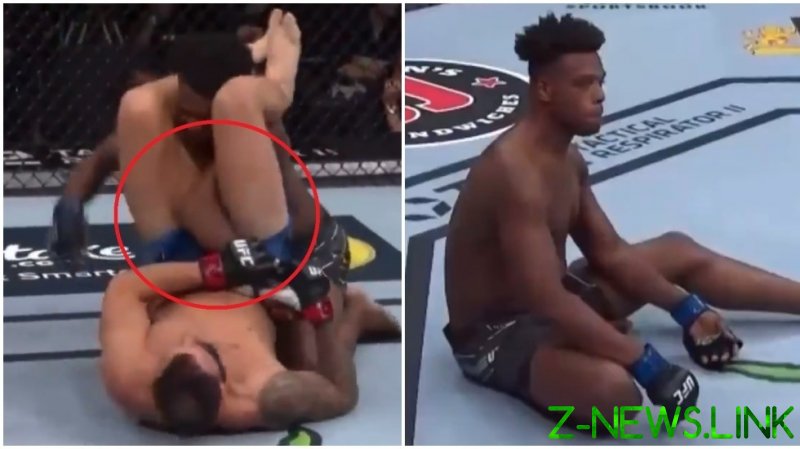 Craig added the scalp of yet another previously undefeated fighter to his record when he sank in the fight-ending submission in the first-round of their main card fight at Saturday’s UFC 263 in Glendale, Arizona, but the manner of his win likely prompted more than a fight fans to double-take when Hill’s arm bent backwards at an horrific angle as a result of the submission hold.

What was even more amazing was that Hill, who entered the fight with a near-perfect 8-0 (1) record, clearly wasn’t going to give up his ‘zero’ without a fight, and he attempted to continue fighting even as his arm was dangling limply across Craig’s chest.

Soon, and perhaps mercifully, the referee noticed the fight-ending injury and called off the fight, awarding the victory to Craig and sending Ameriacn fighter Hill to the emergency room.

Speaking afterwards, UFC boss Dana White was highly critical of the referee’s hesitation in ending the bout with Hill quite obviously injured and unable to continue.

“When an arm is flopping around like this and going both ways, you should probably stop the fight,” White announced at the post-fight press conference.

There were initial fears on the broadcast that Hill’s arm had been badly broken in the incident but White confirmed that the injury suffered was instead a dislocation, which was quickly treated by medical personnel backstage.

“They popped it back it in and the guy has full range of motion,” he said. “That’s nuts.”

Speaking immediately after the battle, Paul Craig paid tribute to Hill’s grittiness and said that he was more than impressed at the toughness he saw on display.

“It’s tap, nap or snap and tonight it happened to snap,” Craig said to Joe Rogan in his post-fight interview. “That’s one hell of an opponent there, he took these shots after his arm was broke, that’s tough.

“The crowd sees it all, that it was one hell of a tight arm bar. For him not to tap, what are you Yanks made of? I felt it go.

“There was no more point of putting pressure, that’s why I was elbowing. It’s the ref’s job to protect the opponent, my job is to finish the fight. I could feel that it was like a wet fish just dancing all over my body.”

For his part, Hill issued a statement on social media after the fight to say that he remains in good health, and that he bears no ill-will towards Craig for doling out the injury.

“I’m ok!!!” he wrote on Twitter. “To the ppl that support me I love u all!! [Paul Craig] thank u for the lesson I will be back and stronger because of it!!! This is part of the game an I will accept it and keep moving forward!!!

“The ref doesn’t suck I wasn’t tapping i was trying to stack but my arm wasn’t there lol I tried to knock him out quick but he just was the better fighter tonight!!! I’ve been dominating for 12 years tonight was my turn to lose!!!!“