Home / WORLD / ‘Like a dog, like trash’: Police probe traffic stop where paraplegic black man was pulled from car by his hair (VIDEO)

‘Like a dog, like trash’: Police probe traffic stop where paraplegic black man was pulled from car by his hair (VIDEO) 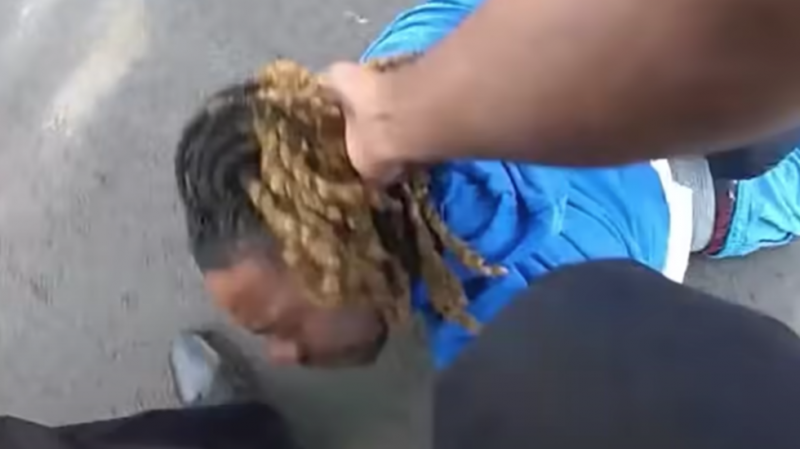 Clifford Owensby has filed a complaint with the NAACP in Dayton over this incident, which occurred last month. Footage of the traffic stop was released by officials last week and has caused outrage, with activists pointing to the physical encounter as the latest example of police brutality.

In the nearly 12-minute video with police bodycam footage, Owensby is pulled over and told to exit his vehicle so a K-9 unit can conduct a “free-air sniff” around his car to find potential drugs. Police say Owensby’s felony convictions in the past, and the fact that he was allegedly seen leaving a “suspected drug house,” justified the search.

When one of the officers asks Owensby to step out, he informs them he is paraplegic. When the officer says he will assist him getting out of the vehicle, Owensby requests the presence of a supervisor. The two then get into a verbal back-and-forth where Owensby refuses to get out of the car until a supervisor is called, and police tell him he is being uncooperative.

Two officers then grab and drag Owensby out of his car by his hair. The suspect is then heard screaming for help as the officers take him into custody.

Owensby did not receive any drug charges, but was given a citation for failure to restrain a child (Owensby says the child in the car is his son) and for having an illegal tint on his window. Police say, however, that over $20,000 in cash was found in the vehicle that may have been near illegal substances. Owensby has denied any wrongdoing, but officials have said the investigation into the money is “active.”

“They dragged me to their vehicle like a dog, like trash,” Owensby said at a press conference about the incident. He has pleaded not guilty to his charges, and his lawyer has said a civil suit is in the works.

Owensby has accused police of profiling, unlawful search and seizure, and failure to read him his rights before he was taken to jail. He says the money was savings and has told reporters he was returning cable TV boxes to a cable company from a property he manages.

Many have expressed outrage over video of the encounter, including Dayton Mayor Nan Whaley, who has called for a “thorough investigation” into the “very concerning” incident.

Dayton NAACP President Derrick L. Foward said the officers should have been put on administrative leave while the investigation into the incident is ongoing.

“The situation was clearly unnecessary, the officer should have been put on … administrative leave immediately until a full investigation ensued,” he said.

Officials have said investigators have spoken to Owensby and are conducting an investigation into the incident, which includes a “review of policies, procedures, and training” of Dayton police.